Other events around the Archdiocese 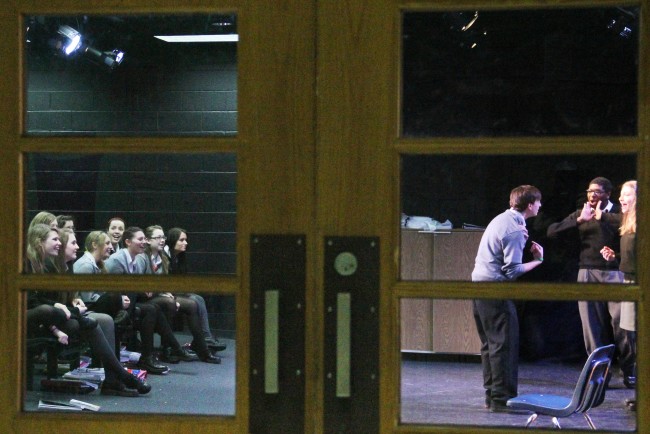 For most Catholic high schools the spring production of a Broadway musical is typically the main theatrical event of the academic year. These musicals require many students to participate – both on stage and off — as well as numerous rehearsals to pull these productions together.

Student actors also need to focus on learning their lines, songs and dance routines in a relatively short timeframe.

At Archbishop Ryan High School in Northeast Philadelphia, in addition to the traditional spring musical production, students now have the opportunity to hone their acting skills, thanks to the newly created Black Box Theater.

The 140-seat theater, built with a $140,000 grant from the Connelly Foundation, was completed this past December. The total cost for the project was approximately $180,000.

According to Mike McArdle, president of Archbishop Ryan, the theater will be named after Kim Flaville, senior vice president at the Connelly Foundation and a 1972 Ryan graduate.

“Kim is very interested in the arts, and this will be a great tribute to her,” McArdle said. The dedication of the Flaville Theater will be held in late spring, he added. 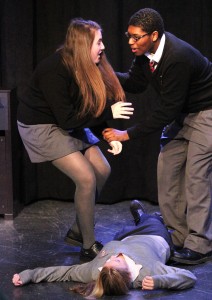 “We’ve always had a strong fine arts component to our curriculum, and we wanted to expand that and enrich it,” McArdle said. “The theater is helping us to accomplish that.” He noted that the theater will be used for small-scale concerts, short plays or coffeehouse-style events.

The grant proposal included adding a theater arts course and a vocal class to the curriculum. Nicole Mesiano teaches theater arts, and there are 29 students in this inaugural class.

Mesiano, a 2000 Ryan graduate, holds a bachelor’s degree in theater fromTempleUniversity, and she is actively involved in community theater productions in thePhiladelphiaarea.

“With the big musicals you’re focused on learning your lines, learning your blocking, and learning your dancing and your music,” she said. “What I think is really neat is that these kids can focus a little bit more on the acting as a craft as opposed to the acting to produce a show.”

Another bonus of having the Black Box Theater is that it gives students more opportunities to participate in theatrical performances behind the scenes — everything from playwriting and directing to set design and lighting design.

“We have a brand new light board and sound board which is amazing,” Mesiano said. “The lighting system we have in there is incredible.” She added that the smaller venue will help students interested in the technical aspects of theater to “shine a little bit more now.”

In the theater arts course the students learn about theater terminology, acting methods, improvisation, set design and dance techniques. In addition, Mesiano requires her students to see a theater production and write a detailed evaluation.

“They have a long list of questions they have to answer and things they have to pay attention to while they’re watching it,” she said.

Mesiano’s goal is to give her students a well-rounded education in the theater. “Many of them are seniors going off to college next year, and they can confidently walk into a theater program or an open audition somewhere and know what’s going on,” she said. 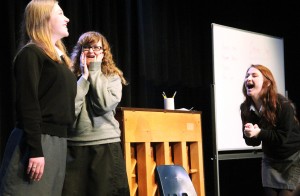 A student performance is planned for the end of the school year, but a final decision hasn’t been made yet, according to Mesiano. She said they may do a showcase where the students work on scenes or perform a comedy or dramatic play.

In addition to gaining acting experience, Mesiano noted that the confidence level of her students has increased since the course began.

“Some didn’t want to get up and do improv,” she said. “They weren’t sure what was going on. Now I have to say to some of those kids, ‘You’ve volunteered enough today. Keep your hand down.’ They’re starting to come out of their shells a little bit more.”

While some of her students want to pursue acting as a career, others are interested in moving beyond their comfort zone and enhancing their presentation skills.

“This is a good stepping stone for some of them to feel more comfortable having all eyes on them instead of hanging in the back all the time,” Mesiano added.

As a Ryan graduate, Mesiano is hopeful the Black Box Theater and the additions to the arts curriculum will attract more students interested in the arts as well as a Catholic education.

“They don’t have to sacrifice their arts education and music education for their Catholic education,” she said. “I feel very blessed to be the one who’s getting this off the ground.”