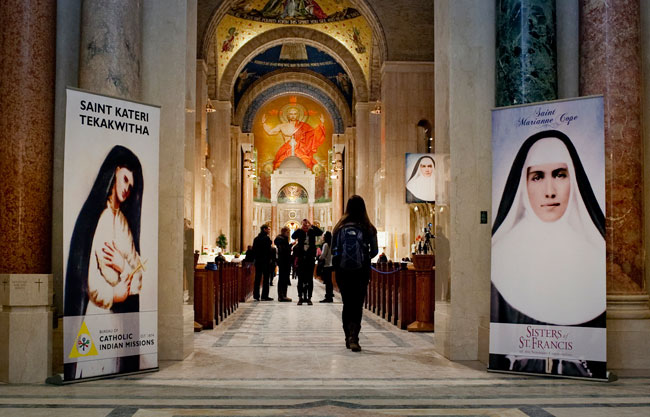 I am Archbishop Charles Chaput ofPhiladelphia.  I’m also a Native American.  When I was asked to preach today, I wondered if some of you would worry that I would give favored attention to our first Native American saint, Kateri Tekakwitha, and neglect St. Marianne Cope.  But I am also a Franciscan like Marianne Cope and am also proud of the fact that the Franciscan Sisters of Syracuse had their origin in a community founded by St. John Neumann, the fourth bishop of Philadelphia.  I love both saints, and I’m honored to speak about them.

Bernard Lewis, the great scholar of Islamic thought, wrote some years ago that one of Christianity’s greatest strengths compared to Islam and other religious traditions is the role it gives and the honor it pays to women.  This is no surprise, since the entire Christian story derives from a young Jewish girl inGalileesaying yes to God. Over the centuries, Mary has played a profound role in shaping Christian thought and culture.  And she’s not alone.  The New Testament is filled with the names of women – both poor and wealthy – who helped Jesus and the Apostles in their ministry.  The missionary work of St. Paul could not have occurred without the support of key Christian women in the communities he visited.

Christian history also has plenty of strong women saints: Teresa of Avila, Catherine of Siena, Clare of Assisi and many others.  The unique genius of women has always been their ability to embody Christian love; not love in a sentimental or cloying sense, but real love, the kind that takes courage, suffering and persistence.

We’re here today to remember two such saints who lived centuries apart.  Marianne Cope was born inGermanyin 1838 and was a young immigrant to theUnited States.  When her father became an invalid, she worked in a factory to support her family.  After her father died and her siblings could sustain themselves, she entered the Sisters of the Third Order of St. Francis of Syracuse, N.Y., rose to a variety of leadership positions, excelled at hospital work and developed an intense commitment to serving the sick and the poor.

At a time when no cure existed for leprosy – the devastating bacterial illness we now know as Hansen’s Disease – and 50 other religious communities had declined to serve the lepers of the Hawaiian Islands, Mother Marianne and six of her Sisters moved to Hawaii.  They eventually established themselves on theisland ofMolokai.  And on Molokai, despite the risks to their own health, they cared for the dying St. Damien ofMolokai and his community of Hansen’s Disease victims.  Mother Marianne died in 1918 after a lifetime of service to the most feared and outcast victims of disease.

Had Mother Marianne lived two centuries earlier, she might have met the other great saint we honor today, the Lily of the Mohawks, Kateri Tekakwitha.  Kateri was born nine years after the martyrdom of Sts. Isaac Jogues and John de Brebeuf.  Born around 1656 into the Mohawk tribe in what is now upstateNew York, she lost her parents and brother to smallpox as a young child.  She was raised by relatives after she survived the disease, though it damaged her eyesight and left her permanently scarred.  She declined to marry, despite natural pressure from her family, and through contacts with French Jesuit missionaries, she developed a love for Jesus.

Despite strong resistance from her tribe and extended family, she was baptized in 1679, moved to a Christian community of Indians where she studied the catechism and helped minister to the poor and aged.  The zeal of her young faith had a profound impact on the Jesuits who oversaw her conversion, and stories of her miracles began within months of her premature death in 1680, at the age of 24.  She understood the cost of being an outcast from personal experience, and she overcame the pain of exile and misunderstanding by an unrelenting commitment to unselfish love.

The Scripture readings for today’s celebration are all about marriage and weddings.  Why is this the case when the two women we remember and celebrate were not married and were committed to virginity – one in a religious community of consecrated women and the other through a personal vow?

Our first reading is from the book of the prophet Hosea whose own marriage is a symbol of God’s relationship with his people,Israel.  The text speaks of Israel as unfaithful and of God as her faithful and loving husband who has a passionate love for his wife despite her infidelity.

Israel is the symbol of us all, the embodiment of the human heart that claims to love the true God but chases after false gods from ancient Baal to modern material greed and comfort.

By the witness of their lives, St. Kateri and St. Marianne give us a redeeming example of the faithful spouse, the baptized Christian.  They embody the words ofSt. Paultaken from our second reading (2 Cor. 10:17 – 11:2) which were spoken of the whole Church: “I betrothed you to Christ to present you as a pure bride to her one husband.”

As God asked Hosea to win back his wife by his own fidelity, God never tires of pursuing us.  The saints are those who allow themselves to be pursued and captured by the spousal covenant love of God.

Our Gospel reading takes us to the scene of a wedding in first century Palestine.  The wedding takes place in the evening after sunset when the groom comes to take his new bride to their new home.  The wedding procession – full of singing and dancing – is led by maiden torchbearers, some of whom are foolish and some wise.

Through the canonization of St. Marianne and St. Kateri, the Church has given us the example of two wise virgins to lead us on our own processions to the wedding feast of the Lamb.  They teach us by word and example that our own enthusiasm for good works and holy lives must not run out.

Marianne Cope and Kateri Tekakwitha and every other holy Christian woman and man in history have chosen the path of the wise maidens, living lives and learning love in ways that readied them to meet the Bridegroom of their souls.  So today and every day, may St. Kateri and St. Marianne pray for us on our journey.

PREVIOUS: Mass for Philadelphians at the March for Life, Washington, D.C.

NEXT: Testimony to the United States Commission on Civil Rights