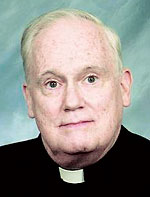 His studies for the priesthood were very nearly ended when during a rural camping trip his automobile was struck by a train at an unmarked railroad crossing. Although the accident would have life-long medical consequences he was ordained on schedule May 19, 1973 by Cardinal John Krol at the Cathedral of SS. Peter and Paul.

“The fact that he survived the accident is a miracle,” said his sister, St. Joseph Sister Julia Dougherty. “Because of his own suffering he was able to identify with those who were suffering. He was a real family person, present for every member on both sides of the family. He was a great guy, but very down to earth. He had a great sense of humor and could say something very funny, but the next minute he would say something very profound.”

To sum her brother up, Sister Julia said, “He could read a person, see their needs and make them feel special.”

After ordination Father Dougherty’s assignments included parochial vicar at Stella Maris, Immaculate Heart of Mary, Our Lady of Ransom and Mater Dolorosa parishes, all in Philadelphia, and faculty at St. Charles Borromeo Seminary.

“He always had a good sense of humor because of his illnesses, and he reminded me of St. Laurence, who kept his sense of humor while he was being tortured to death,” said Msgr. Joseph Garvin, one of his seminary classmates. “He had physical limitations but he was mentally perfect. He could not do some duties of a priest so he studied to become a certified clinical psychologist, and used those skills. At St. Charles he was one of the most respected and beloved members of the faculty.”

“He was a brilliant homilist and could give you more in a minute than many can give you in 20 minutes. He had empathy and compassion especially for those in any kind of pain.”

Vince Small, and his wife, Joyce, are parishioners at St. Margaret and became good friends with Father Dougherty. Small remembers, as an example of how he would see humor in his own disabilities and suffering, Father Dougherty would recount how shortly after the accident, with his life in the balance and heavily sedated, he had to be transported to a large hospital. Because an ambulance wasn’t available, he was placed in a hearse. He woke up in the hearse and assumed he was dead, but looking at the passing countryside, he concluded that wasn’t too bad.

“He was a simple man, he especially loved breakfast,” Small said. “He was a brilliant homilist and could give you more in a minute than many can give you in 20 minutes. He had empathy and compassion especially for those in any kind of pain; he helped many seminarians who were in a crisis. His funeral Mass was delayed until the seminarians were back from their break, because he was loved.”

A parish Mass will be celebrated for Father Dougherty at St. Margaret on Sunday, Jan. 13, at 7 p.m. with Msgr. Garvin as the principal celebrant and homilist.

Archbishop Charles Chaput will be the principal celebrant of his funeral Mass on Monday, Jan. 14 at 11 a.m. in St. Martin’s Chapel, St. Charles Borromeo Seminary. Concelebrants will include Msgr. Garvin; Fathers Robert J. Chapman and Patrick J. Welsh; and Msgr. J. Brian Bransfield, who will be the homilist.

NEXT: Donald Parsons, supporter of Catholic education, dies at 87