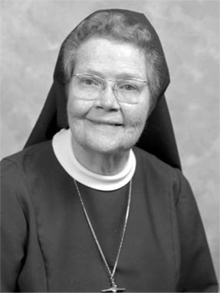 Born in Philadelphia, Sister Kathleen entered the Sisters, Servants of the Immaculate Heart of Mary in 1951 from Most Blessed Sacrament Parish, Philadelphia, and professed her first vows in 1953. She received her Bachelor of Arts degree from Immaculata University and a Master of Science from Marywood University in Scranton.

The funeral Mass was celebrated Jan. 16 at Camilla Hall. Father William Dean was the celebrant and homilist. Father Francis J. Mulranen was a concelebrant. Interment followed in the Immaculata Cemetery.

In addition to the members of her religious community, Sister Kathleen is survived by her sister, Ellen Lennon. She was predeceased by her parents, Hugh and Kathleen Scullin Lennon and a sister, Patricia Lennon.