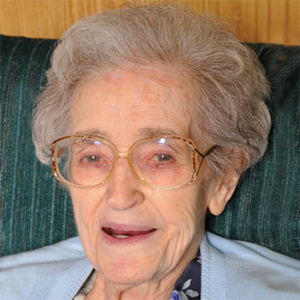 Sister Virginia Stallings, S.S.N.D., who taught elementary and junior high school grades in four states for more than 25 years before becoming a high school librarian at the Institute of Notre Dame in Baltimore, died Jan. 27 at Maria Health Care Center in Baltimore. She was 92 years old and had recently celebrated her 70th jubilee as a professed member of the School Sisters of Notre Dame.

Virginia May Stallings was born on Sept. 15, 1920 in Baltimore to Grace M. (Kirkwood) and William D. Stallings. Before she was 3 years old her mother died of tuberculosis; her father died of the same disease less than four years later. Virginia was raised by her paternal grandparents and, after her grandmother’s death, an aunt. She attended St. Gregory School in West Baltimore, where she first expressed interest in becoming a religious, and earned a scholarship to the former Mount St. Agnes High School in Baltimore.

In August 1939, Virginia entered the School Sisters of Notre Dame. As a novice she was given the religious name Sister Mary Marina. She professed her first vows in July 1942 and her final vows six years later. She resumed using her baptismal name, Virginia, years later.

Sister Virginia earned a bachelor’s degree in education in 1957 from what is today Notre Dame of Maryland University and a master’s in library science in 1972 from Villanova University.

In addition to teaching assignments in Maryland, New Jersey and New York, Sister Virginia taught grades six and seven at St. Boniface School in Philadelphia from 1957 to 1964. In 1969 she became the librarian at the Institute of Notre Dame high school in Baltimore, where she served for 20 years.

After her semi-retirement, she continued living at the school, offering community service there. In 1992, she moved to Villa Assumpta, home to retired sisters in Baltimore County. She has lived at Maria Health Care Center, adjacent to Villa Assumpta, since 2010.

Her funeral Mass was celebrated Jan. 31 at the Chapel at Villa Assumpta in Baltimore County. Burial followed at Villa Maria Cemetery in Glen Arm, Md.

Sister Virginia is survived by cousins Robert Kirkwood of Ellicott City, Md., and Bernice Pescosolido of Bonita Springs, Fla. An uncle, Msgr. Albert T. Stallings of the Archdiocese of Baltimore, died in 1990.

PREVIOUS: Known for keeping many friendships, Msgr. Degnan dies at 91