His wife is gone, but she is still with us 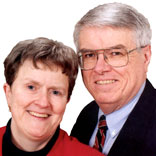 As you may have heard or read, my wife Monica, who contributed to this column, passed away on the evening of Jan. 6. She died at home, in our bedroom, of uterine cancer. First diagnosed in late February 2010, she found out in late February 2012 that she had, at most, a year to live. She lasted 10 months and packed an incredible amount of living, and loving, into each one of them.

We knew, the whole family knew, that your prayers and the prayers of so many others made a difference over those 10 months.

There was a gradual decline in her abilities, but until the final eight days she was up and around, going out to lunch, attending Mass, visiting family and making sure we were making as many happy memories as possible.

She completed the main items on her “bucket list,” those things she wanted to do before she died. And she enjoyed telling people about her “chuck-it” list. Obligations she no longer had to meet. (At the top of the list was some dental work scheduled for early March 2012.)

After she died, I came across a number of notes and pieces of writing she had been working on throughout last year. This is from one she titled, “Things I Want to Tell You.”

“We all have a natural compass guiding us to God.

“He made us because he loves us and takes delight in watching us grow closer to him.

“I look forward to resting.

“Life is so much simpler when you make decisions with God. God speaks to each of us in a way we will understand. Life is like a maze. Sometimes we know which way to go, sometimes we hit a wall. God is the ‘cheese’ we’re trying to find. We wish we could jump up high enough to see where we’re going. Where do I go next? But we need to trust our instinct because we are made to return to God.

In her work with family caregivers, Monica stressed the idea of the presence of God. Of a caregiver’s, of anyone’s, ability to talk to God “right here, right now.” She would explain that it didn’t take away hardships and heartaches, but it helped a person better realize that he or she is never alone in those difficult times.

You aren’t alone in your difficult times. My family and I aren’t alone in ours. In heaven, or on earth, we remain in the presence of God. Now in his presence, in a new and wondrous way, Monica is praying for you and me. She promised she would. She keeps her word.

PREVIOUS: Knowing the horrors of war may be the experience we need

NEXT: Facing up to the ‘epidemic’ of military suicides