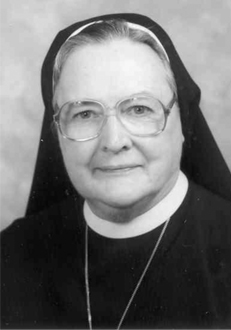 Born in Philadelphia, Sister Honora Mary entered the Congregation of the Sisters, Servants of the Immaculate Heart of Mary in 1939 from St. Charles Borromeo Parish in Bensalem and professed her first vows in 1941. She received her Bachelor of Music degree from Immacualta University and a Master in Music from West Chester University.

Sister Honora Mary taught at St. Rose of Lima, Holy Innocents and Good Shepherd grade schools, and Little Flower High School, all in Philadelphia; St. Katharine, Wayne; and for 17 years, at Holy Saviour, Norristown.  Sister Honora Mary’s last assignment was at Our Lady of Fatima, Bensalem, where she served as an assistant in the library for 13 years. In 2007 she was assigned to Camilla Hall where her ministry was the apostolate of prayer.

The funeral Mass was celebrated Feb. 9 at Camilla Hall. Father William Dean was the celebrant and homilist. Msgr. Seamus F. Brennan, pastor of Immaculate Conception Parish in Somerville, N.J., was a concelebrant.

In addition to the members of her religious community, Sister Honora Mary is survived by her brother, retired Deacon John Ivers of the Diocese of Metuchen, his wife, Eileen, two nieces and four grandnephews.  She was predeceased by her parents, Thomas and Nora Gormley Ivers and a brother, Thomas.

NEXT: Dr. Billings dies at 95; she helped develop widely used method of NFP