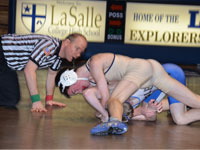 One of these days, some Catholic League wrestling opponent is going to defeat La Salle High School.

Just not this year.

In what was supposed to be a rebuilding year, the Explorers methodically defeated visiting Father Judge, 39-24, and increased their stronghold on the Catholic League crown to five straight. La Salle’s victory streak versus league opponents has now reached 50.

Although the uniqueness of every championship can certainly survive on its own individual merit, this year’s accomplishment was particularly special because there were several teams that entertained title hopes during the regular season.

It appeared early as though a total blowout was in the making. In a collective span of 3 minutes, 56 seconds, Sal Anderson, Pat McGinley and Andrew McLaren each pinned his opponent at 113, 120 and 126 pounds, respectively, to give the Explorers an 18-0 lead. Decisions by Tim Walker at 132 and Greg Konieczny at 138 increased their advantage to 24-zip.

A forfeit victory at 145 and a pin by Nick Reidy at 152 cut Father Judge’s deficit in half. Decisions by Kolby Stein at 160 and Nate Ezzo at 170 fueled the home crowd’s anticipation of the inevitable.

Judge’s Idris White stopped the bleeding with a pin at 182, but a forfeit win at 195 and a meet-clinching decision by Antonio Pelusi (a team-best 35-4 record for the season) at 285 offset Judge’s wins-by-decision at 220 (Jim Galasso) and 106 (Tim McCall).

Though impressed with his entire cast, Gebauer particularly lauded Stein’s decision victory because he had lost to the same opponent during the regular season. The odds of that occurring in wrestling are very low, and although a Stein loss would not have had altered the overall victor, it served as a barometer of the toughness of a team that lost significant pieces from last year’s graduation.

“He was facing a stellar wrestler,” Gebauer said. “He had to make some adjustments to beat an opponent like that. He understood what he had to do, and he went out and did it.”

“We were losing a little bit of momentum,” Stein said. “I was just trying to do my best to keep us moving forward.”

The fact that Stein is one of many Explorers who return next season doesn’t bode well for championship hopefuls.

Then again, at this point, even a regular-season win over La Salle might be cause for a major celebration.