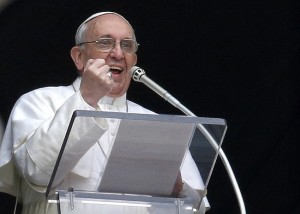 Pope Francis gestures as he leads his first Angelus from the window of his private apartment in St. Peter’s Square at the Vatican March 17. (CNS photo/Max Rossi, Reuters)

“The Lord never tires of forgiving,” the pope said March 17, before leading his listeners in praying the midday Angelus. “It is we who tire of asking for forgiveness.”

Pope Francis, who was elected March 13, spoke from his window in the Apostolic Palace for the first time. Despite gray skies, a crowd easily numbering 150,000 turned out to see the pope for his first scheduled appearance in St. Peter’s Square since the night of his election.

He opened with an expression of what has already become his trademark informality, greeting listeners with a simple “buongiorno!”

Commenting on the day’s Gospel reading (Jn. 8:1-11), Pope Francis noted that Jesus addresses a woman caught in adultery, not with words of scorn or condemnation, “but only words of love, of mercy, which invite her to conversion: ‘Neither do I condemn you. Go, and from now on do not sin any more.'”

Pope Francis referred to a book on the subject of mercy by German Cardinal Walter Kasper, retired president of the Pontifical Council for Promoting Christian Unity, whom he described as a “superb theologian.”

“But don’t think I’m advertising my cardinals’ books. That’s not it,” the pope said in the sort of spontaneous aside that listeners have already to come expect from him.

“This book has done me so much good,” Pope Francis said, apparently referring to a work published in 2012 under the German title “Barmherzigkeit” (Mercy).

“Cardinal Kasper said that to feel mercy, this word changes everything,” the pope said. “A little mercy makes the world less cold and more just.”

The Argentine pope also recalled an encounter more than 20 years ago with an elderly woman in Buenos Aires, who told him: “If the Lord did not forgive all, the world would not exist.”

Pope Francis said he had wanted to ask her if she had studied at Rome’s prestigious Pontifical Gregorian University, because her words reflected the “wisdom that comes from the Holy Spirit: interior wisdom regarding the mercy of God.”

Following the Angelus, the pope offered a particular greeting to Romans and other Italians, noting that he had chosen for his papal name that of St. Francis of Assisi, which he said “reinforces my spiritual tie with this land, where — as you know — my family origins lie.”

Earlier that morning, Pope Francis celebrated Mass at the Church of St. Anne inside Vatican City, where his homily also treated the subject of divine mercy.

“It is not easy to trust in the mercy of God, because that is an incomprehensible abyss,” he said. “But we must do it.”

Jesus likes us to tell him even our worst sins, the pope said. “He forgets; he has a special ability to forget.”

At the end of Mass, Pope Francis drew attention to the presence of Father Gonzalo Aemilius, founder of the Liceo Jubilar Juan Pablo II, a high school in Montevideo, Uruguay. He described the priest as one “who has long worked with street kids, with drug addicts. He opened a school for them, he has done so much to make them know Jesus.”

Afterward, outside the church, the pope personally greeted each of the approximately 200 members of the congregation, then walked over to the nearby St. Anne’s Gate and greeted members of a crowd that had formed on the other side of the boundary separating Vatican from Italian territory.

He also sent his first official Tweet from @pontifex: “Dear friends, I thank you from my heart and I ask you to continue to pray for me. Pope Francis.”

PREVIOUS: Reflection and rediscovery in the Year of Faith

NEXT: Did Jesus baptize anyone? Lectors and the she/he problem