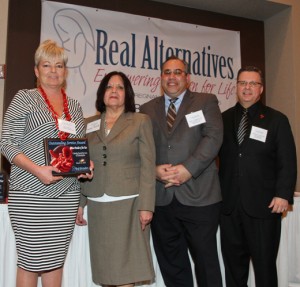 Catholic Social Services (CSS) of the Archdiocese of Philadelphia has been named Pennsylvania’s Service Provider of the Year by the Harrisburg-based Real Alternatives, a state-funded nonprofit that administers the Alternative to Abortion Services Program of the Commonwealth.

The award is presented annually to the provider agency that has served the most pregnant women across the state.

The award was officially presented in Harrisburg on March 21 by Lourdes Padilla, deputy secretary for the Department of Public Welfare’s Office of Income Maintenance to Amy Stoner of CSS.

Padilla, who was filling in for Lt. Gov. Jim Cawley, who was called away for legislative duties, had a moving experience of her own that made the ceremony especially important to her.

She herself was pregnant and because of problems was advised to have an abortion. She refused, telling the doctor she was pro-life. Her son is now 35 years old.

“We are extremely grateful and humbled,” Stoner said in accepting the award, “to know that CSS’s impact is so far-reaching and honored by Real Alternatives as the Service Provider of the Year.

“It has been a truly gratifying experience to work with so many women by offering them a positive, caring and supportive approach to motherhood. We continue to strive toward excellence and will take every step necessary to ensure that we’re serving those most in need throughout our community.”

CSS provided comprehensive support services to more than 2,173 pregnant women at 10 sites in the Archdiocese in 2012, including counseling, mentoring, education assistance, adoption and enrollment in benefit programs.

Young women and mothers regularly return to CSS for emotional support and essential parenting resources needed for the best care of their families. It is one of 30 service providers located throughout Pennsylvania that are assisted by Real Alternatives. 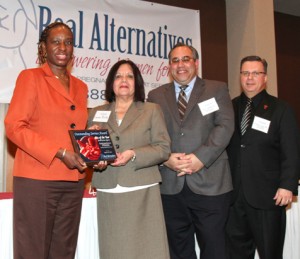 Renee Hudson-Small, of CSS’ Northeast Family Service Center, accepts an award from Real Alternatives for services delivered to women and families at the archdiocesan facility in Northeast Philadelphia.

In addition to the award presented to CSS, another award was presented to CSS’s Northeast Family Service Center with administrator Renee Hudson-Small accepting. Among other archdiocesan officials at the award ceremony were Joseph J. Sweeney, archdiocesan director for Catholic Human Services, and James Amato, deputy secretary of Catholic Social Services.

Through Real Alternatives approximately $6.04 million is distributed to the 30 member groups in the state annually, mostly through state funding but also some federal TANF (Temporary Assistance to Needy Families) funds.

The Mission of Real Alternatives is to provide life-affirming alternatives to abortion services. These compassionate support services empower women to protect their reproductive health, avoid crisis pregnancies, choose childbirth rather than abortion, receive adoption education and improve parenting skills, according to its mission statement.

NEXT: Thousands, including Philadelphians, expected to march for marriage Tuesday