Cultural Heritage Mass celebrates ‘all one people under one God’ 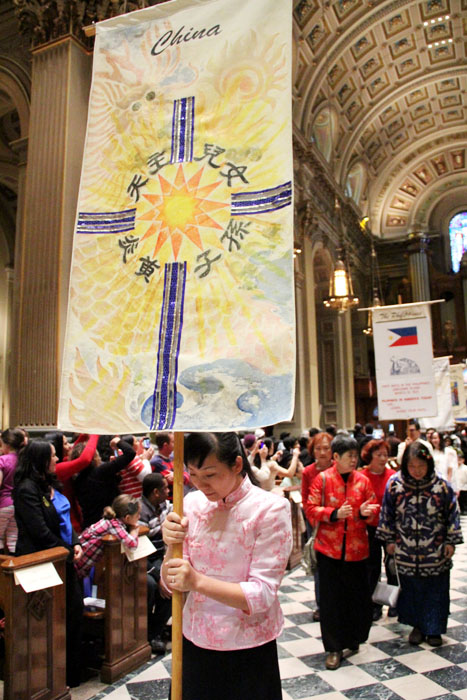 Suki Li, from Holy Redeemer Parish, carries the banner for the Chinese community during the entrance procession of mass. 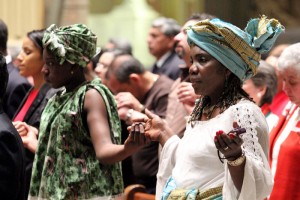 Caroline Karluah and her mother Juwli Roberts-Karluah, from the Liberian community pray The Lord’s Prayer together.

There is nothing quite like the annual Cultural Heritage Mass to give the idea of what it means to belong to the Universal Church and to live in a country that draws future citizens from around the world.

Many of the participants, dressed in native attire, marched proudly behind their country’s banner in the opening procession.

In his homily, Archbishop Chaput invited the congregation to look around them to see the all the people from many different lands.

(See a photo gallery from the Mass.)

This diversity is also evidenced among those who were born in America through their own heritage, which is very often a mixture of different nationalities. Looking at his own mixed ethnicity, he noted on his father’s side he was mostly French-Canadian, and on his mother’s side mostly Potawatomi Indian, but also a touch of Irish.

“I’m happy to see my Indian sisters and brothers here, and I’m happy to represent the people I came from in service to this local Church as Archbishop,” he said.

The rich variety of ethnicities was also present through the various hymns, readings and prayers, including Portuguese, Malayamam, Swahili, Tagalog, Indonesian, Spanish, Vietnamese, Polish, Haitian, and of course, English. 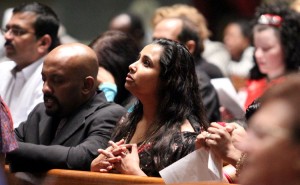 Christine Das, from the Indian Latin rite, prays during mass.

It was probably most fitting that the honor of giving the opening remarks went to a Native American – Cherokee Chief Buffy Red Feather. After all it was the Native Americans who welcomed the early European settlers centuries ago.

“The Mass is wonderful; it gives an opportunity for all people to come together and to show that the Church is united; all one people under one God,” Red Feather said.

For Guerline Veronique Milcent-Mesidor, who attended with a large Haitian group, it was “a good and grateful day to be here.” It is, she said, “good for everybody in the whole country to get together and see the different aspects of the country.”

But it was not just about being from another country, it was about being in America, in the view of Cesar Alguiros, who was with family and friends from the Philippines. “It’s like thanksgiving for having us here in the United States,” he said.

NEXT: Devotion to Mary in painting spreading from Latin America to Philadelphia, by way of Pope Francis