Father Gallagher, a PhD scholar, teacher and pastor, dies at 81 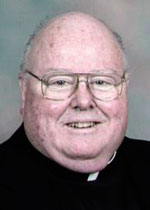 Ordained May 11, 1957 by Cardinal John O’Hara at Immaculate Conception Church in Philadelphia’s Germantown section, his first assignment was as parochial vicar at St. Nicholas Parish in Weatherly, Pa.

That same year he was appointed to the faculty of Cardinal Dougherty High School where he taught and was a vice principal.

Father Gallagher, who had a PhD in education from the University of Pennsylvania, took a year off from his vice principal duties to serve as a visiting professor at the National University of Ireland.

“He was a very intelligent man, a real scholar and an expert in education statistics, and that’s why the Irish government invited him to Ireland,” said Msgr. James P. McCoy, who was also a Dougherty vice principal.

“He was a wonderful individual; he never seemed to get ruffled,” said Deacon Paul Kern, who served with Father Gallagher at St. John Baptist Vianney. “He was always willing to listen to people, and whenever someone came to him with a problem, they seemed to walk away with a smile on their face. I never knew anyone to say anything sour about him.”

“We went into the seminary the same day, we were ordained the same day, and we both went upstate for a first assignment,” Msgr. Curran said. “Halfway through the summer they discovered they didn’t have enough teachers at Cardinal Dougherty, and we were told we would teach there during the week and go back to our parishes on weekends.

“He was a bright, witty, gifted man and he loved teaching. After he retired he came to my parish as a senior priest and stayed until I retired.”

Concelebrants will include Msgrs. Curran and McCoy, Father Thomas J. Brennan and Msgr. James P. McBride, who will be the homilist.

Father Gallagher is survived by his sister-in-law Katherine, a niece, nephew, great niece and cousins.

NEXT: Father Maher, ordained late in life and known for kindness, is laid to rest