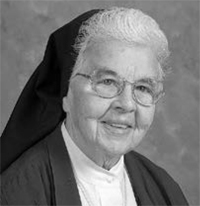 Born in Kulpmont, Pa., Sister Mary Elaine entered the congregation of the Sisters, Servants of the Immaculate Heart of Mary in 1944 from St. Joseph Parish, Locust Gap, Pa., and professed her first vows in 1947. She received her Bachelor of Arts degree from Immaculata University and a Master of Arts from the Religious Studies Division at St. Charles Borromeo Seminary.

Sister Mary Elaine taught in the elementary and secondary schools of the Archdiocese of Philadelphia. Among them were St. Aloysius Academy, Immaculate Conception, Archbishop Prendergast and St. Maria Goretti High Schools. She taught theology for 10 years at Immaculata High School in the diocese of Metuchen, N.J.

She also was missioned at Villa Maria Academy in Santiago, Chile, for six years and in the dioceses of Harrisburg and Allentown. In 2004 Sister Mary Elaine was assigned to Camilla Hall. Until her death, her ministry there was the Apostolate of Prayer.

The funeral Mass was celebrated at Camilla Hall March 13. Father William Dean was the celebrant and homilist. Interment followed in the Immaculata Cemetery.

In addition to the members of her religious community, Sister Mary Elaine is survived by a brother, Edward, and two sisters-in-law, Theresa and Arlene. She was predeceased by her parents, Joseph and Esther Murray Joyce, six brothers, Raymond, Bernard, Charles, Lawrence, Joseph, Jack, a sister, Anne Marie Joyce Youch and a cousin, Sister Mary of the Angels, I.H.M.

NEXT: St. Charles seminarian with devotion to Divine Mercy dies at 39