Kearns Goodwin recalls growing up Catholic in Brooklyn, with a peculiar penance: praying for the Dodgers 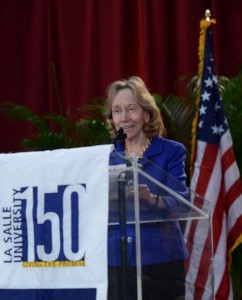 Doris Kearns Goodwin’s topic at La Salle University on March 21 was Abraham Lincoln, but at the same time, perhaps because it was a Catholic setting, she graciously shared a story from her own childhood. It’s not the first time she has told it but it is worth repeating.

It tells something about the innocence of children and something too of the rather strange notions that were instilled into Catholic children, pre-Vatican II.

First of all, Goodwin is a historian but she is also a rabid baseball fan, a trait she inherited from her father.

Probably a precocious child, at age 6 he taught her the art of keeping a baseball score card. She would meticulously record balls, strikes, runs, hits and errors for the entire day game so she could relate it to him when he got home from work.

She and her dad were Brooklyn Dodgers fans, and when she was 7, just about the time she was preparing for first penance and first communion, it was announced that Roy Campanella, the Dodgers’ catcher, was coming to the neighborhood to give a speech.

She’d never seen a ballplayer outside of Ebbets Field. The catch was he was speaking at a local Protestant church. Catholics could never go into a Protestant church — that was a sin, she had been told.

It was OK, her father assured her, it was the church hall, they would be sitting on folding chairs and he was speaking about sportsmanship, it wasn’t a religious service.

They went, and she enjoyed the program, but she was still worried, convinced this was a terrible sin that she would have to tell at her first confession.

This ate at her and she was not looking forward to confession. Something happened that almost got her off the hook. She had also been taught that if someone was dying and unbaptized, anyone could baptize them and the person would go straight to heaven.

Not long before first confession there was a terrible train accident in her neighborhood and people were rushing down to help. She decided to go too, and maybe she could find someone to baptize and her sin would be forgiven.

Actually there were a number of priests there so it wasn’t necessary. She was secretly relieved; she wasn’t looking forward to lifting blankets to ask people if they would want a little girl to baptize them.

Now all of this sounds a bit far-fetched, maybe embellished a bit. Actually, a check of the Internet shows there indeed was a horrible train collision in her neighborhood when she was 7. Thirty people died and about 100 were injured.

The day of first confession came. Right away she told the priest about her terrible sin of going to a Protestant church to hear Roy Campanella. The priest told her the same thing her father had said. It wasn’t a sin. But then he asked her what else she had to confess.

She really had another baseball sin that she tried to hide in the middle of her other sins. She talked too much, she wished some people harm, she argued with her sister. Wishing harm caught the priest’s attention. “Who do you wish would be harmed?” he asked. “I wish Yankee players would break their arms or legs or ankles so the Dodgers would win a World Series,” she said. “How often do you wish that?” he asked. “Every night,” she said.

The priest explained you really shouldn’t wish people harm, and anyway the Dodgers would win a World Series on their own.

“Say a prayer for the Dodgers,” he told her as she left the confessional.

The Dodgers did eventually win the World Series in 1955, but two years later the owner, Walter O’Malley, moved the team to Los Angeles.

There is little doubt that all Dodgers fans, including Goodwin and her confessor, wished O’Malley all kinds of bodily harm. For a few years after that she stopped watching baseball, but then she got hooked on the Boston Red Sox, a team just like the Dodgers, usually a winner but rarely the big prize. She remains a diehard fan to this day.