Pope: Confession is not like dry cleaners, but is encounter with Jesus 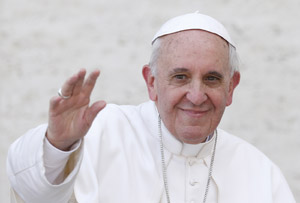 VATICAN CITY (CNS) — Going to confession isn’t like heading off to be tortured or punished, nor is it like going to the dry cleaners to get out a stain, Pope Francis said in a morning Mass homily.

“It’s an encounter with Jesus” who is patiently waiting “and takes us as we are,” offering penitents his tender mercy and forgiveness, he said April 29.

Members of the Vatican’s investment agency and a group of religious women joined the pope for the Mass in the chapel of the Domus Sanctae Marthae, where the pope lives.

“God is light, and in him there is no darkness at all,” the pope said, quoting from the First Letter of John.

While everyone experiences moments of darkness in life, the verse refers to the darkness of living in error, “being satisfied with oneself, being convinced of not needing salvation,” he said.

As John continues, the pope said, “If we say, ‘We are without sin,’ we deceive ourselves, and the truth is not in us.”

People have to start out with the humility of realizing “we are all sinners, all of us,” he said.

Even though it is embarrassing to admit to and tell the truth about one’s thoughts and deeds, embarrassment or “shame is a true Christian and human virtue” linked to the traditional virtue of humility.

“Humility and kindness are the framework of a Christian life,” the way a Christian must walk in life, he said.

“Oftentimes we think that going to confession is like going to the dry cleaners” to get out a stain, but it isn’t, Pope Francis said.

“It’s an encounter with Jesus” who “waits for us to forgive us” and offer salvation, he said.

The pope said confession isn’t like “going to a torture session” where Jesus “is waiting to lambast me.”

Confession “is going to praise God, because I — the sinner — have been saved by him,” who always waits and always forgives “with tenderness.”

When the Lord forgives, he is performing an act of justice, the pope said, “because he came to save and forgive us,” welcoming us with the affection of a father toward his children.

People need to believe that when they sin, Jesus will defend them because he is just and wants people to have “that peace that only he can give.”

However, people must go before the Lord with courage, even joy, “with our truth of being sinners,” he said.

“We must never disguise ourselves before God,” who “asks us to be humble and kind” and truthful.

In his homily April 27, the pope said Jesus invites Christians to go outside their comfort zone and proclaim the Gospel with joy.

Do not be afraid of the joy of the Holy Spirit, who opens the path “forward,” outside of oneself, he said.

Present for the Mass were workers from the Vatican post office and staff from Vatican’s St. Martha Dispensary, a maternal and pediatric clinic that serves mainly immigrants.

The pope warned against the formation of “little groups” of self-righteous whose hearts are closed “to the freshness of the Holy Spirit” and who “bargain with power” and try to solve problems alone, “among ourselves.”

These groups of self-righteous defend their hold on the truth with “slander, gossip” who only look within, wall themselves in and tear down others, the pope said.

Religious communities that are free open themselves up to “the freedom of God and the Holy Spirit,” and they “press on, even in the face of persecution.”

He asked people to look at their own parish, church group or religious community and ask whether they are open to the Holy Spirit and open to spreading the word of God.

“Because the good is like this: It always spreads, the good never curls up inside” but reaches out to the ends of the earth with joy.