50 Years of Advocacy for Catholic Health Care in Pennsylvania 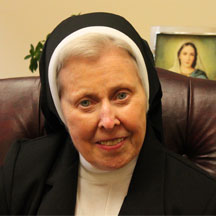 Much has changed in healthcare over the past half century, from rising costs to incredible advancements in technology and treatments.  Throughout these changes, the Pennsylvania Catholic Health Association (PCHA) has never wavered in its mission to continue Jesus’s healing ministry and advocate for the sanctity of life, access to health care for all and the common good.

Now celebrating its 50th anniversary, the PCHA has 60 members, including hospitals, long-term care and other related health care facilities, and individuals involved in Catholic healthcare in Pennsylvania.

A guiding force for much of PCHA’s 50 years has been the association’s president of 30 years, Sister Clare Christi Schiefer, O.S.F.

Sister Clare has worked in healthcare most of her life, starting at a local hospital in Hazelton as a sophomore in high school.  After attending nursing school, she entered the Congregation of the Sisters of St. Francis of Philadelphia while working at Sacred Heart Hospital in Allentown.  Sister Clare worked at hospitals in several different states before landing in Philadelphia, where she was asked by her provincial to consider serving as president of the PCHA.

“When I was approached [to interview for the position] I knew absolutely nothing about public policy or lobbying.  I initially said I wasn’t the right person for the job, but my provincial wouldn’t take no for an answer,” said Sister Clare, smiling.  “I actually bought a high school civics book just to start learning about public policy.”

Sister Clare explained that before going to her interview she said a prayer used by St. Francis of Assisi to discern God’s will and then heard the hymn “Here I am Lord, I Come to do Your Will” while she was in her car.  “After that I just knew I was going to be offered the position,” she said.

Since becoming president in 1982, Sister Clare has come a long way from that high school civics book.  She has led the organization in lobbying for or against legislation and regulations that have an impact on Catholic healthcare ministries – including protecting the sanctity of life and preserving religious liberty.

PCHA provides support for Pennsylvania’s Catholic healthcare community through advocacy, communication, education and united action; putting special emphasis on recognizing the needs of children, the elderly, the poor and the underserved.

“I consider myself to be an ambassador for Christ in the public square,” says Sister Clare of her unique position as a nun who is also a lobbyist.  “Many times when I go to talk to a legislator we end up talking about more than just policy.  They often want to discuss other matters, ask my advice, and ask if I will say a prayer for them or their family.”

Over the past 50 years, PCHA has been involved in dozens of major healthcare debates and legislative changes.   Among those, Sister Clare considers the state’s Children’s Health Insurance Program (CHIP), legislation to address end-of-life issues, creation of the adult Basic Coverage program, and channeling tobacco settlement fund

s for health care initiatives as several of the greatest successes in which PCHA was involved.

Sister Clare explained that many of PCHA’s issues have resurfaced several times throughout the association’s existence.  Universal access to health care, challenges to tax exemption status and charitable accountability, end-of-life concerns, and protection of religious conscience are a few recurring issues that are again at the forefront.

Looking ahead, the PCHA’s goals include expanding healthcare coverage and reducing the number of uninsured, especially for low-income working adults and immigrants; improving availability of and funding for mental health, behavioral health and substance abuse services; opposing taxpayer funded abortions in the health care exchange; and pursuing options for aging in place for the elderly and those with disabilities.

When advocating on federal issues, the PCHA works alongside Catholic health associations from other states and the Catholic Health Association of the United States (CHA).

“Sister Clare is a tireless advocate for Catholic health care in Pennsylvania,” said Julie Trocchio,
senior director of community benefit and continuing care at the CHA.  “She has been especially effective in her advocacy on behalf of persons who are economically poor and the value of nonprofit, tax-exempt health care.”

Sister Clare believes Catholic health institutions will always have different characteristics than their secular counterparts:  instead of treating only a patient’s presenting symptoms, Catholic healthcare focuses on providing a continuum of care throughout a person’s entire life.

“I hope that someone would choose Catholic healthcare because of our values,” Sister Clare explained.   “We work to provide compassionate quality care, which focuses on treating the whole person – not just the physical problems, but also their social, emotional and spiritual needs.”

As Sister Clare recognizes, Catholic health institutions will always face challenges that underscore the need for PCHA, such as threats to religious liberty, increasing competition and the ability to act consistently with faith values and Church teachings.

“Jesus came to teach, to preach and to heal,” she said.  “Without the healing ministry, the Church’s mission would not be complete.”

PREVIOUS: With different pro-life views, can our country be called united?

NEXT: Easter is more than one day – celebrate for 50