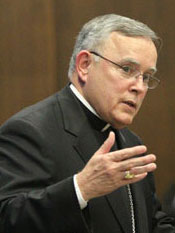 Fathers Joseph J. Gallagher and Mark S. Gaspar had been placed on administrative leave by the Archdiocese since in 2011 after being named in the Philadelphia grand jury report on sexual abuse of minors by clergy.

Although the Archdiocese did not specify the nature of the allegations at that time or since, its statement on Sunday indicated allegations of conduct in violation of the “Standards of Ministerial Behavior and Boundaries” against the two priests were substantiated.

As a result Archbishop Charles Chaput, after consulting with the archdiocesan Professional Responsibility Review Board, determined them unsuitable for ministry.

Father Gallagher, 78, and Father Gaspar, 43, have not been permitted to serve in public ministry, celebrate the sacraments or present themselves publicly as priests since their suspension two years ago.

“As I’ve done in the past, I relied closely on the Professional Responsibility Review Board and the Multi-Disciplinary Team during this process,” said Archbishop Chaput. “The counsel provided by these experts, who have devoted their careers to combatting sexual abuse, is key to this work.  I’m grateful for their efforts. After reviewing all the facts, as well as recommendations from competent external authorities, I made the decisions I feel are right and just.”

A third priest, Msgr. Richard T. Powers, 77, also has been deemed by Archbishop Chaput to be unsuitable for ministry.

The priest resided at Epiphany of Our Lord Parish in South Philadelphia until 2011, when he was placed on leave but not as a result of the grand jury report.

The Archdiocese explained in its statement that an internal probe of documents resulting from a subpoena in March 2011, after the February release of the grand jury report, revealed “a list of priests, among whom were those who had allegations of sexual abuse against them. All of those priests were either deceased, laicized or living a life of prayer and penance with the exception of Msgr. Powers.”

Before turning the list over to Common Pleas Court, the Archdiocese suspended the priest and began an investigation of his case.

Although an announcement about Msgr. Powers was made last year at Epiphany of Our Lord, the Archdiocese “was not permitted to make a broader public announcement due to the court-imposed gag order” related to the trials of Msgr. William J. Lynn and Father James J. Brennan taking place last year, the statement said.

Msgr. Powers was found to have “a substantiated allegation of sexual abuse of a minor that occurred approximately 40 years ago outside the Archdiocese of Philadelphia,” according to the statement.

In all the cases, the Archdiocese said it followed protocols that have developed as a result of the clergy abuse scandal that has seared the Catholic community first in 2005 following the first grand jury report, then in 2011 after the second, again weeks later when more than two dozen priests were placed on leave and then in 2012 with the trial of priests and the conviction and sentencing of Msgr. Lynn for child endangerment.

Following its process for the current cases, the Archdiocese sent allegations it had received immediately to the district attorney’s office on the appropriate county.

The district attorneys “released” the cases, according to the Archdiocese, implying that law enforcement found insufficient cause to bring criminal charges.

At that point each case was investigated by the Archdiocese’s Multi-Disciplinary Team of experts in a wide range of fields. Following completion of the investigation, each case was considered by the Review Board, which made its recommendation to Archbishop Chaput.

His final decision may be appealed by the priests to the Holy See at the Vatican. Should they decline to appeal or if the appeals fail, they could be laicized (removed from the clerical state) or asked to accept a supervised life of prayer and penance.

Of the 26 cases of priests placed on leave following the grand jury report, seven remain unresolved in some stages of the above process with no indication of when they might be resolved.

On three occasions last year Archbishop Chaput announced resolutions in 15 of the cases of priests on leave. Of the 15, eight priests were found suitable for ministry and seven priests were found unsuitable.. In one additional case, the priest died before a full investigation could be conducted so it was not possible to reach a conclusion.

All cases followed the same procedure of allegations reporting, release of the case from the district attorney, investigation, review and final decision, the Archdiocese said.

The Archbishop’s decision was announced last weekend at each of the parishes where the priests last served or resided.

The Archdiocese pledged to continue its parish-based initiative “Honesty, Healing and Hope in Christ: Confronting Sexual Violence in Our Archdiocese,” which was introduced last May. Through four phases over six months, the program addresses the variety of reactions, thoughts and feelings experienced by parishioners as a result of the announcement and in the days and weeks ahead.

The initiative addresses the victims of the allegation or violation of the “Standards of Ministerial Behaviors and Boundaries,” the parishioners including school and Parish Religious Education Program (PREP) families, and the priests on administrative leave.

The Archdiocese said the program “continues a journey of honesty, healing and hope toward the restoration of trust.”

In its statement the Archdiocese encouraged people to report an allegation of sexual abuse by contacting their local law enforcement agency and/or the archdiocesan Office for Investigations at 1-800-932-0313.

Anyone wishing to report a violation of the Standards of Ministerial Behavior and Boundaries may contact the same office.