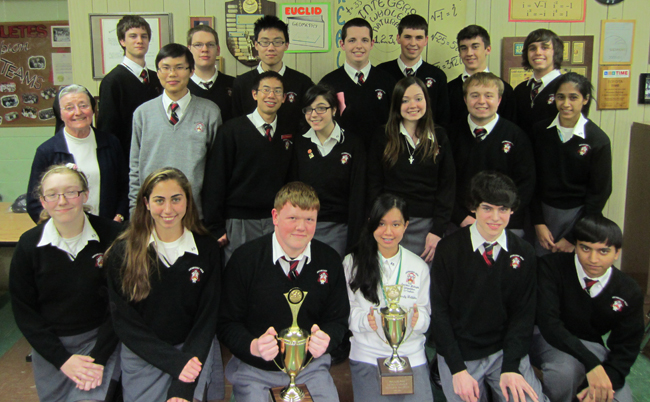 The contingent of the Catholic Schools' Mathletes team from Archbishop Ryan , including their teacher shown at left, Sister Alice Hess, I.H.M. 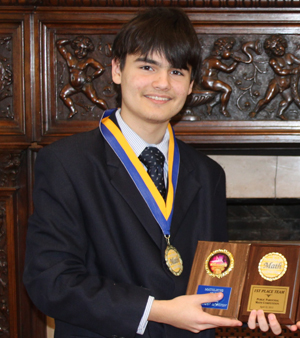 Alexandru Damian, a freshman at Devon Preparatory School and a member of the Catholic Schools Mathletes team, won the top individual achievement award at the recent Catholic-Public schools mathematics competition.

Whenever there is a high school Mathlete competition in the Philadelphia area there is a fair chance Archbishop Ryan High School will be the winner, or if it is a combined team drawn from several schools they will be on the winning side.

The astonishing success of Archbishop Ryan in Mathletes can be attributed to their long-time coach, Immaculate Heart Sister Alice Hess, who may well be the best-known mathematics teacher in the Philadelphia area.
Since her arrival at Ryan more than two decades ago, she only recalls three times that they did not win the Catholic schools championship. Before coming to Ryan, the team from her previous school, St. Maria Goretti, was tops in Mathletes.

“I see it as a wonderful opportunity to teach leadership,” Sister Alice said. “Healthy intelligence is a wonderful thing but it all comes down to leadership. Never lose focus, it’s not over until it is over. The kids want to be champions and are willing to work hard to achieve that goal.”

For Ryan senior Andrew Lenherr, the championship season “has been a lot of work, but a lot of fun,” he said. Ryan junior Craig Carr agrees, “This year has been great,” but adds, “our goal is to do it again next year.”

While Sister Alice calls it leadership, it is qualified by a strong dose of good old-fashioned discipline. She is not happy if a student misses a session without good reason.

“If they have a doctor’s appointment and know it three weeks in advance, they should tell me then, not just at the last minute or not show up,” she said.

Students don’t have to be geniuses to make the cut. Determination counts for more than anything else, she believes, and although math is her field, her methods could probably be applied to any other subject.

Although Mathletes is open to students in all four years of high school, Sister Alice does not begin to prepare them until the end of the sophomore year. “They have to be going into trig or pre-calc,” she said.

Other schools may well take younger students, especially if they show talent. For example, at Devon Prep, of two students who made the All-Catholic team, one was a freshman and the other a sophomore.

“We look for math ability, the ability to plan with others and motivation,” said Devon Prep coordinator Chip Hollowell, who restarted his school’s dormant program in 2010.

The Public-Catholic championship match was a challenge, according to Hollowell. The students were divided into teams of five with the top students in team A and so forth. Individual students had two tests; in round three their team worked as a group.

Most interesting, although Devon Prep only had two students on the 24-member team it was Devon freshman Alexandru Damian who took the top individual prize in a competition where he may have been the youngest person.

“There were really a lot of smart people there,” Alexandru said. “I hoped to do well, but I didn’t expect to be the best. I’m so happy.”

As Alexandru explained, Mathletes is not a matter of memorization. “You have to have critical thinking,” he said.

As for his future, as a freshman he hasn’t yet decided. “Maybe computer science or some form of mathematics,” he said.

Clearly, Mathletes has proved useful for a number of Sister Alice’s former students.

“I was a member of the Mathlete team and also enrolled in Sister Alice’s Honors Pre-Calculus, AP Calculus and AP Statistics during my junior and senior year,” said  Theresa Jenkins, a 2005 graduate of Archbishop Ryan who went on to Temple University on an academic scholarship and is now a consulting pension actuary. “The strong mathematical educational foundation Sister Alice provided has led to a successful and bright future in my mathematics-related career. I owe her a debt of gratitude and I am grateful for her hard work and dedication to her students past and present.”

Ryan Hall, a 2001 Ryan graduate, was a student of Sister Alice for two years and captain of the Mathletes team during his senior year and also took trigonometry pre-calculus and AP calculus.

At La Salle, where he attended on scholarship, he took level four calculus as a freshman and was the only one in his class to receive an A.

Since college he has been working for Philadelphia Insurance Companies in various analytical roles.

“The work ethic that Sister Alice’s classes, as well as Mathletes, instilled in me the technical knowledge to be ahead of the curve in college and also prepared me for the hard work that would be required of me,” he said. “Sister Alice has a wonderful way of maximizing people’s potential and I take these lessons with me every day of my life.”