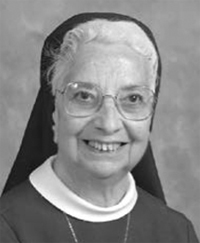 Born in Philadelphia, Sister Miriam entered the Congregation of the Sisters, Servants of the Immaculate Heart of Mary in 1939 from St. Joachim Parish in Philadelphia, and professed her first vows in 1942. She received her Bachelor of Arts degree from Immacualta University and pursued further studies at St. Charles Borromeo Seminary and Villanova University.

Sister Miriam taught at St. Cecilia School, Philadelphia; St. Aloysius Academy, Bryn Mawr; and St. Alice, Upper Darby. She served as principal at St. Philomena, East Lansdowne and St. Agnes, Sellersville.
For 12 years, Sister Miriam taught in Peru and Chile. She was as a congregational regional superior from 1981 to 1988. In 1999 she became a member of the staff at Camilla Hall.

The funeral Mass was celebrated March 27 at Camilla Hall. Father William Dean was the celebrant.  Sister Miriam’s first and second grade pupil, Msgr. Wilfred J. Pashley, was the homilist and a concelebrant. Msgr. Richard J. Skelly was also a concelebrant.

In addition to the members of her religious community, Sister Miriam is survived by her sister, Rosalie Jafolla Manfredi, nieces, nephews, grandnieces and grandnephews.  She was predeceased by her parents, Vincent and Mary Grande Jafolla, two brothers, Dick and Vincent, and four sisters, Grace Milhouse, Katherine Barth, Marie Tempe and Rita Jafolla.