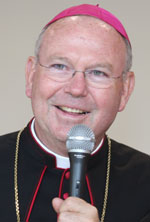 Bishop Joseph McFadden passed away on May 2 after three years of service as the president of the Pennsylvania Catholic Conference. The conference is the public policy agency of Pennsylvania’s bishops.

“Bishop McFadden had all of the attributes that make an effective leader in public policy, including his willingness to engage with legislators and his ease around all people. He did not shy away from spirited discussion,” said PCC Executive Director Dr. Robert J. O’Hara.

Bishop McFadden guided the PCC’s work during his time in Harrisburg, with particular focus on legislation that upholds the dignity of every human person from conception to natural death, supports Catholic education, safeguards religious liberty and protects the poor and vulnerable.

About school choice, Bishop McFadden said, “When we look across the education landscape in Pennsylvania … we see that some parents, especially low-income families, have no choice but to send their children to a school that is not helping them reach their potential. This is why the bishops of Pennsylvania see school choice as a defining social justice issue for our time.”

Education was particularly important to Bishop McFadden as he served as the chair of the United States Conference of Catholic Bishops’ Committee on Catholic Education.

“Bishop McFadden did not impose Catholic teaching on the legislators and legislative staff he worked with. He willingly engaged them in matters of public policy, and that helped to advance so many of the issues that impact Catholics,” O’Hara said.

In addition to the EITC and OSTC programs, the bishop also worked to pass legislation that held abortion clinics to the same standards as other ambulatory surgical facilities, increased support for alternatives to abortion programs and championed services that support the poor.

During the budget debate last year, when line items supporting Pennsylvania’s most needy people were being discussed, Bishop McFadden wrote “… we do not always give the poor in our community the attention they deserve …. The human impact of the state budget debate in Harrisburg often is overlooked. Particularly troubling is the potential loss of funding for long-supported programs that help those in dire need and provide a sound, reasonable safety net for our citizens.”

He was also a champion for religious liberty. During last year’s Fortnight for Freedom, Bishop McFadden led an online daily video novena; the prayer sessions included a special daily reflection on the importance of religious liberty. He was particularly skilled at using new media to communicate, hosting video chats with school students and engaging in conversations on Facebook and Twitter.

Bishop McFadden also kept before him at all times the Eucharist and the person of Christ. “I can remember after one particularly long day, Bishop McFadden said to me, ‘We don’t have to save the world, Bob. Jesus has already done that for us, and we simply have to follow him.’ Seeing our efforts, which bump up against politics regularly, in that eternal and Christ-centered way, has kept us focused in our work,” O’Hara said.

The PCC will update its website, www.pacatholic.org, as more information becomes available.

PREVIOUS: Team building is essential, in sports and spiritual retreats

NEXT: A prophet at the end of the week of fear and evil