At funeral, Bishop McFadden recalled as champion of new evangelization 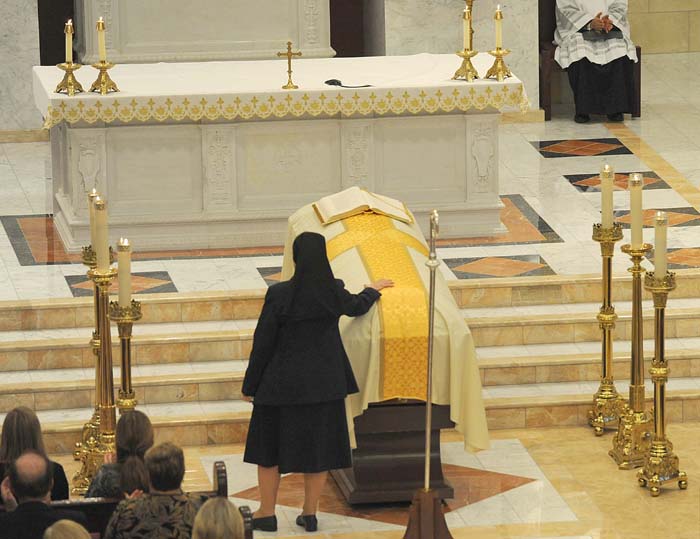 Immaculate Heart Sister Jane McFadden prays a silent prayer at the casket of her brother, Bishop Joseph McFadden, before the start of his funeral Mass May 8 in Harrisburg, where he was bishop. (Emily M. Albert/The Catholic Witness)

With a solemn Mass of Christian Burial, faithful from Harrisburg, Philadelphia and beyond filled Holy Name of Jesus Church to offer the ultimate prayer for Bishop Joseph P. McFadden, who died suddenly of a heart attack May 2 while in Philadelphia to attend a meeting of the state’s bishops.

A congregation of nearly 2,000 mourners filled the pews and the extra chairs set up for the Mass. Among them were Cardinal Justin Rigali, Archbishop Charles Chaput and other archbishops, bishops — including most of Pennsylvania’s Catholic bishops — priests, deacons, religious sisters, lay faithful and people from other faith traditions.

Prelude music reflected the bishop’s Irish roots. Members of his family could be heard singing the chorus to “Hymn to Our Lady of Knock,” as the congregation sat in prayerful silence.

Archbishop Chaput was the principal celebrant of the Mass, which was broadcast on local and national television and radio stations. Coverage of the Mass was also broadcast in Ireland, where the bishop’s family roots run deep. 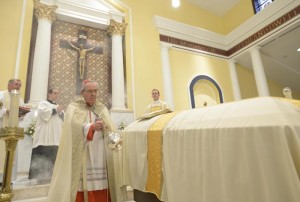 Cardinal Justin Rigali, retired Archbishop of Philadelphia, incenses the casket of Bishop Joseph McFadden during the commendation and farewell at the funeral Mass May 8 in Harrisburg. Cardinal Rigali ordained Bishop McFadden an auxiliary bishop of Philadelphia July 28, 2004. (Chris Heisey, The Catholic Witness)

“The Holy Father was saddened to learn of the untimely death of Bishop Joseph Patrick McFadden and he offers heartfelt condolences to the clergy, religious and lay faithful of the Diocese of Harrisburg as well as to the late Bishop’s family and friends,” Archbishop Vigano said. “With gratitude for the many graces which accompanied Bishop McFadden’s years of priestly and episcopal ministry, his Holiness joins those present at the Mass of Christian Burial in commending his soul to the loving mercy of Christ the Good Shepherd and cordially imparts the apostolic blessing as a pledge of consolation and peace in the Lord.”

In his homily, Bishop Barres spoke of Bishop McFadden as a champion of Catholic education and the new evangelization.

“He always had a clear-sighted and realistic view of the financial, marketing, demographic and enrollment challenges of 21st century Catholic education but he had, at the same time, a Churchillian courage and winning spirit in addressing those challenges,” he said. “He inspired so many of us around the country to believe in the future of Catholic education as one of the most important pillars of the new evangelization.”

Bishop Barres said Bishop McFadden “had an enormous effect on more people than we can ever really know. He was profound, wise, completely devoted to his loving, extended family, realistic, caring, funny, engaged, determined, energetic, zealous and intelligent,” he said. “But most of all, in all of his endeavors, he was a completely devoted follower of Jesus Christ, our Lord and Savior, the Way, the Truth and the Life, the Resurrection and the Life.”

As the faithful of the Diocese of Harrisburg mourned the death of Bishop McFadden – who was installed as the tenth bishop of the diocese on Aug. 18, 2010 – they shared stories of ways in which he had touched their lives.

Maureen Gerzewski of St. Rose of Lima Parish in York, Pa., said she was blessed to have seen Bishop McFadden five days before his death, as he celebrated the diocese’s annual Mass to recognize the gifts of people with disabilities.

Joseph, who has cognitive disabilities, shared a positive exchange with the bishop during a reception after that Mass, and it touched his mother’s heart.

“Bishop McFadden came over to my son and greeted him, ‘Hey Joseph, how are you doing?’ He knew my son by name, and I was just so impressed.”

Alexandra Parisi, a freshman at Trinity High School in Camp Hill, Pa., received the sacrament of confirmation from Bishop McFadden and served for him at a number of Masses as an altar server.

“He was so good with us young people, and always had a sense of humor,” she said. “He was so outgoing with us, and because of that he really got across the message of Jesus.”

Her lasting impression of Bishop McFadden will be the words with which he concluded his homilies: Pray for me as I pray for you.

“Ever since I first heard him say that, I’ve written it at the bottom of all the letters that I send,” she said.

Jen Reed is managing editor of The Catholic Witness, newspaper of the Diocese of Harrisburg.

NEXT: Gosnell convicted of murder of three babies, manslaughter of adult