Helen Alvare to speak on women, religious freedom in Year of Faith talk 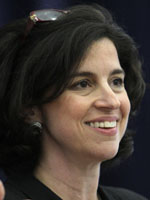 Is the freedom of women and freedom of religion a matter of clash or collaboration?

Helen Alvare will argue they are not mutually exclusive concepts and are more relevant than ever, during a talk Tuesday, May 14 at St. Charles Borromeo Seminary’s Vianney Hall, 100 East Wynnewood Road in Wynnewood.

Part of Archbishop Charles Chaput’s Year of Faith Lecture Series, Alvare’s talk is expected to reflect the topic for which she has become an expert, according to Meghan Cokeley in the archdiocesan office of Life, Family and Laity, which is sponsoring the series.

Cokeley said Alvare is well known for speaking about the Catholic faith and the implications for doing so in public. “Helen’s expertise is that topic but specifically on women’s issues that are in the forefront of the culture — women’s issues and the relationship to religion and religious freedom,” she said.

“I believe Helen’s point is that by affirming religious freedom you are also setting women free. That religious freedom, the belief in God and all the morality that implies, actually ends up confirming women in all their liberty. You can’t have one without the other.”

Alvare brings to bear a solid background in law and Catholic theology to her arguments concerning religious freedom.

She is a law professor at George Mason University in Arlington, Va., a consultor for the Pontifical Council for the Laity at the Vatican and leads the Conscience Protection Task Force at the Witherspoon Institute in Princeton, N.J.

Alvare earned her law degree from Cornell University and her master’s in theology from the Catholic University of America. Last year she wrote the book, “Breaking Through: Catholic Women Speak for Themselves.”

Cokeley said the talk will be relevant to her personally and likely to many women, but all others as well.

“Because of my deep Catholic convictions and my deep convictions about femininity and the great gift of woman for the world, if I can’t reconcile religious belief with my own femininty then I am in trouble,” she said.

“For every woman in the world, at the heart of a woman’s vocation is this question of, Is the belief in God somehow irreconcilable with her femininity? As a Catholic woman, that belief in God is what actually grounds our femininity and our fruitfulness in the world, but the contributions that we have in the world come directly from being a woman of faith.”

The current opposition by religious congregations and people of faith over the U.S. Department of Health and Human Services’ mandate for contraceptive coverage in the health care reform law, despite moral objections, has underscored a threat to religious freedom in the United States.

Cokeley believes the question of religious freedom is not just for Catholics but “evangelical Christians are also being affected by the HHS mandate; orthodox Jews, really anyone of faith is affected by this question and it is relevant for all of us.”

Other upcoming lectures in the series will tackle the tensions between science, Catholicism and modern atheism, with Notre Dame University professor Brad Gregory on Sept. 12; and the failures of institutionalized religions in America, with New York Times columnist Ross Douthat on Sept. 19.

Archbishop Chaput will cap the Year of Faith series with his talk on the call to conversion and the New Evangelization on Oct. 1.

It is not too late to register for the May 14 program, which begins with Alvare’s talk at 7 p.m. and continues with a question-and-answer session until 9, or any talk in the series.

Registration is online at the website for the lecture series.