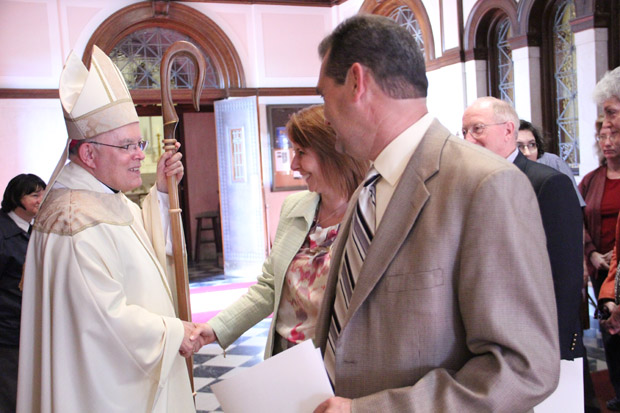 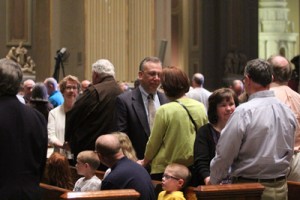 Couple renew their marriage vows during the Mass.

The Mass celebrated on the evening of May 4 by Archbishop Charles Chaput for couples celebrating their 25th or 50th anniversaries of married life or even more, was in keeping with a Philadelphia custom dating back for more than 30 years.

Sadly, in keeping with the times, the honorees belong to a diminishing club. In the not so distant past two Masses were required to accommodate the number of couples. Now they all fit quite easily at a single Mass.

“Catholic couples promise to love their spouse as Christ loves us, which is rather extraordinary. You don’t promise to love your spouse as a movie star loves his spouse or her spouse. That would be damaging; so many of them today are quickly unfaithful to their promise.”

To understand how Christ loves us we need to look no further than the crucifix, the Archbishop suggested.

“Nobody here has done that perfectly. Now the reason we have anniversaries, whether it is 35, 45, or 50 years or more is in order to commit ourselves to that kind of radical love again.”

After his homily Archbishop Chaput invited the couples to stand and renew their marriage vows.

“Not to romantic love,” he said, “although I hope your life is still romantic after 50 years, but to real love. The love that results from the fact that God has taken his place dwelling within your hearts.” 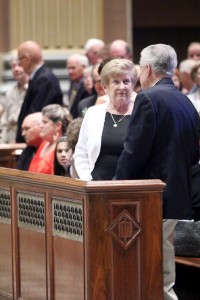 Mary and Jim O’Neill of St. Maria Goretti Parish in Hatfield renew their vows after 50 years of marriage.

Marriage of course, has to be lived to be fully grasped, and there were none better to ask to explain this than some of the couples who have successfully completed a half-century of married life. And by no means does one size fit all.

“Marriage is here to stay; you’ve just got to hang in there and stick together through the tough times; the good time is easy,” said Jim O’Neill.

“It’s not any easy journey, but it is a very fulfilling journey. We had some rough spots, but with God’s help we survived,” said his wife, Mary.

Tony Marino takes a light-hearted view of his 50 years of marriage. “Agree with your wife all the time and have a glass of wine every night,” he advised.

Teresa Marino took a more serious path. “Believe. Have faith and hope that things will work out for the good. Be patient,” she advised.

Conventional wisdom dictates that for a successful marriage, the couple must think long and hard before taking such a serious step. Alex and Ann Augunas are living proof that conventional wisdom isn’t always right. When they met, they just had a mutual feeling they were meant for each other. Within two weeks he proposed and they were married within five months.

“Her mother said it wouldn’t last, but here we are 50 years later,” Alex said. “I think it is the spirituality. Just our love for one another.”

A good marriage “takes a lot of prayer,” Ann said. “I don’t believe that old saying, ‘opposites attract.’ We do have a lot in common. We don’t fight over what we should do, we just do it.”

PREVIOUS: Philadelphia Mass for Bishop McFadden set for his birthday

NEXT: Three preparing for priesthood reflect on God’s calling in their lives