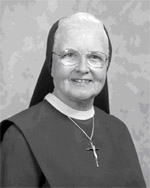 Born in Philadelphia, Pa., Sister entered the Congregation of the Sisters, Servants of the Immaculate Heart of Mary in 1941 from Transfiguration Parish, Philadelphia, and professed her first vows in 1944. She received her Bachelor of Arts from Immacualta University and a Master of Arts in Education from Villanova University.

She served as a teacher and/or principal in the Archdioceses of Philadelphia, Forestville, Conn. and Atlanta, Ga., the diocese of Harrisburg and in Lima Peru. In 1991 Sister began her assignment as a Pastoral Minister at St. Laurence Parish, Highland Park and served in that position for 20 years. In 2011 she was assigned to Camilla Hall where her ministry was the Apostolate of Prayer.

The funeral Mass was celebrated at Camilla Hall on May 7th. Father Michael J. Gerlach was the celebrant and homilist. Fathers Joseph McLaughlin, O.Praem, James J. Shea, Sch.P. and William Dean were concelebrants. Interment followed in the Immaculata Cemetery.

In addition to the members of her Religious Community, Sister is survived by her brother, Robert (Betty) Mulhern, nieces, nephews, grandnieces and grandnephews. She was predeceased by her parents, Owen and Mary Barry Mulhern and brothers, Owen and Philip.

NEXT: Sister Maria Benedicta Blaine, I.H.M., nurse for over 60 years, dies at 89