There may have been a record for most pictures taken after a sporting event, but hey, when you win a championship, you want to savor it for posterity sake.

On a hot afternoon May 22 on an immaculately landscaped field at Arcadia University, Monsignor Bonner-Archbishop Prendergast High School — aka Prendergast when talking only girls’ sports — produced a memorable performance in the Catholic League softball championship.

“In the beginning of the season, we had some flaws, but we kept improving,” said Prendergast coach Eleanor Orsborn, a 1981 Prendy graduate. “We had a (non-league) walk-off win over Episcopal, and things started coming together.”

The rich irony of two schools playing for the CL title a little more than one year removed from almost closing their doors before a last-second reprieve saved the day did not go unnoticed by either team.

“Both schools have such a respect for each other,” said junior Bernadette Carey. “Not only about softball, though Hubert’s is definitely a school that has had an unbelievable amount of success.

“Everyone on both teams understood what the other ones went through. There was such fear. The thought of the two of us playing for the Catholic League championship seemed like an impossibility last year. Thank God that things worked out like they did.” 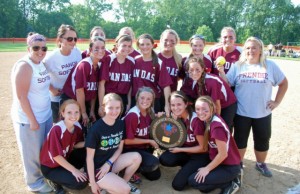 The fact that Prendergast was even in the Catholic League final was a testament to the Pandas’ undying resolve. Few had expected Prendergast to defeat Cardinal O’Hara and Lansdale Catholic to reach the championship; thus, it could be argued that the Pandas had nothing to lose and that the pressure was squarely on the shoulders of a Hubert’s team that was the defending Catholic league champion and easily the most feared CL team for the past decade.

But Hubert’s coach Dave Schafer was careful to point out that his players did not overlook Prendergast.

“They reached the championship on merit and they are a very good team,” said Schafer. “We ended up not playing well. We made mistakes that we don’t usually make and we didn’t get timely hitting. But Prendergast played better and deserve everything they got. They are worthy champions.”

After a warm congratulatory embrace with Orsborn, Schafer made a point of stopping by Prendergast’s victorious huddle and lauding them on a job well done. It was a class move and many Pandas, all of whom offered an appreciative round of applause after Schafer’s quick but meaningful speech, extended verbal praise for understanding the true meaning of sportsmanship.

At one point, Schafer and Bonner-Prendergast president Father Jim Olson were shaking hands and reminding the Pandas that they have been long-time friends. It was a moment that defined Catholic League sports.

But there was a game that was played, and it was one that Prendergast will never want to forget while Hubert’s would just as soon pretend it never happened.

Although Prendergast’s offense was vital in its entirety, the most important contribution was arguably its second run.

The Pandas had taken advantage of a lead off single by Carey, two infield errors, and a sacrifice fly by senior pitcher Brooke Lachette to take a 1-0 lead in the top of the first. Hubert’s answered in the second on a double play grounder that scored senior catcher Jess Grzywna.

Softball being a game of momentum unlike many others, it was imperative for the underdog Pandas to regain a sense of confidence. A single by junior Nicole Shields started the Prendergast third inning, and two outs later Lachette smashed a double to left center field that scored Shields with the go-ahead run.

In essence, Prendergast had made a statement that it belonged in the 2013 showcase event.

“A lot of people probably doubted us and that is understandable,” said Orsborn. “But the girls really came to play. They expected to do good things. They were not intimidated.

“That’s sort of the way they have been for most of the year, especially lately. They felt that they had every right to win the game. So even after they tied us, it didn’t surprise me that they found a way to retake the lead. But it really was an important part of the game.”

Then came an onslaught that few could have imagined.

In the top of the fifth, Carey drew a leadoff walk and Shields singled. Senior Maggie Griendling ripped a run-scoring double, and junior Rachel Schwindt produced an RBI groundout to increase the Pandas’ lead to 4-1.

Up came Lachette, who deposited a fastball well over the left-center field fence, and incredibly, Prendergast was ahead by a seemingly insurmountable 6-1.

As the Pandas streamed out of the dugout, Lachette tried to remain stoic, recognizing that if there was any team capable of digging itself out of a five-run whole, it was Hubert’s.

Still, she couldn’t contain a smile as she rounded second base and saw her teammates forming a line at home plate.

“That was when I knew we had it won,” Lachette said. “Even though Hubert’s is a great team and can score a lot of runs, I just felt completely safe that we were going to win the game.”

The Bambies mounted a threat in the bottom of the fifth when they loaded the bases with one out. After a force-out at home, up stepped Hubert’s senior pitcher Erica Ragazzone, who in the CL semifinals had crushed a walk-off, two-run homer in the bottom of the eighth against Little Flower.

After falling behind in the count 3-1, Ragazzone took a second strike and then belted a drive to left center. Sprinting and then diving was Carey, and when she emerged with the ball in her glove, the Bambies’ chances of winning their second straight title, third in the last four years, and fifth in the past seven suffered a major blow.

“It wasn’t up in the air too long for me to think about it, and that’s good,” said Carey, downplaying the sensational nature of her snare. “I didn’t want it to get by me because the bases were loaded. I thought I had a chance to catch it and thank God I did.”

In the bottom of the seventh, Hubert’s scored a pair of runs – one on a two-out, line-drive homer by Ragazzone – before a high fly ball to right field off the bat of senior Gabby DeLeo settled into the glove of senior Lindsay Twigg for the final out.

“I wanted that last out to come to me so bad,” Twigg said. “When she hit it, I knew I was going to catch it, but it was hit so high that I was like, ‘Get down here.’ It was something I will never forget.”

Twigg presented the ball to Orsborn – who minutes later would be deluged with a bucket of water, much to her delight – but the coach returned it to Twigg during a celebratory game-ball ceremony.

Among the underrated performances was the play of junior third baseman Robin Gannon. In addition to two singles, Gannon robbed Hubert’s of two singles via defensive gems, and started a double play in the fourth that erased a two-on, one-out jam in the fourth.

“For some reason, I wasn’t nervous at any point of the game,” said Gannon, a claim that was supported by numerous Bambies. “Maybe it was us being the underdog, but this is unbelievable. I’m speechless.”

After contributing a single and a walk, senior teammate E.M. mie Vogelman (yes, that is precisely how she spells her name; poet e.e. cummings, who often ignored traditional punctuation, would no doubt be proud) said she had noticed a general and energetic calm on the bus ride to the game.

That Hubert’s only struck out once didn’t surprise Vogelman.

“Brooke knows her defense is behind her and she felt good about challenging them,” Vogelman said. “She trusted them to make the plays.”

Orsborn said that was precisely the game plan: challenge the Hubert’s hitters on defense while on offense remaining patient instead of haphazardly swinging at tosses from a pitcher whose earned-run average was less than one run per game.