Conflicts among Christians harm the body of Christ, pope says 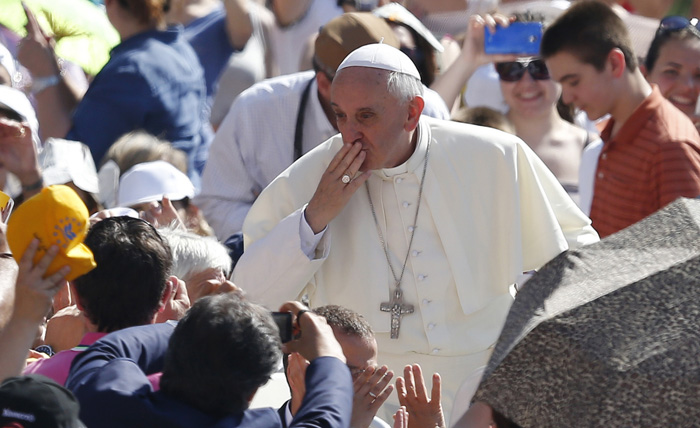 VATICAN CITY (CNS) — The church is the body of Christ, but when Catholics fight among themselves or Catholics and other Christians are in conflict with one another, they make Christ’s body suffer, Pope Francis said.

“Don’t make the body suffer with our divisions and conflicts,” the pope said June 19 at his weekly general audience.

With an estimated 80,000 people gathered under the hot sun in St. Peter’s Square, Pope Francis said that “today, before leaving home,” he had spent more than half an hour with an “evangelical pastor” and they prayed together for Christian unity.

“Unity is a grace we must ask from the Lord so that he would free us from the temptation of division, fights among us, selfishness and complaining about each other — how much damage, how much evil that chatter creates,” he said.

“How much damage is created by divisions among Catholics and between Christian communities. Evangelical Christians, Orthodox Christians, Catholic Christians — why are we divided? We must try to bring unity.”

“Pray that the Lord would give us unity,” he said.

The problem, though, isn’t only a matter of differences between Christian denominations, he said. “How can we have Christian unity if we are unable to find unity among us Catholics? To have unity in our families? How many families are fighting? Seek unity.”

Continuing a series of audience talks about the Second Vatican Council’s descriptions of the church, Pope Francis focused his talk on the church as the body of Christ.

Describing the church as Christ’s body emphasizes that it is “a living reality. The church is not a charitable, cultural or political association, but a living body, that walks and acts in history,” he said.

And like any real body, he explained, the church has a head — Jesus Christ, “who guides, feeds and supports it” — and if Catholics are not firmly united to Jesus, the head, then the body dies.

“Let us remain united to Jesus,” Pope Francis said. “Let us trust in him, direct our life according to his Gospel, nourish ourselves with daily prayer, listening to the Word of God, participating in the sacraments.”

Being part of the body of Christ also means recognizing that different members have different functions, but they are all vital for the health of the body, he said. Being united “means being with the pope and the bishops, who are instruments of unity and communion.”

At the end of the audience, Pope Francis recalled that tens of thousands of pro-life Catholics from around the world had joined him for Mass June 16 to celebrate “the Gospel of Life.”

NEXT: Catholic services at a funeral home and Communion wine for children