Participants at the May 10 breakfast hosted by FOCUS, the Fellowship of Catholic University Students.

Two hundred people gathered at the New Evangelization Prayer Breakfast, REACH | Philly, on May 10.  The event was hosted by FOCUS, the Fellowship of Catholic University Students, a missionary organization that was founded in response to Blessed Pope John Paul II’s call for a New Evangelization.

Over 300 missionaries currently serve on 74 university campuses throughout the United States, and their goal is to launch students into lifelong Catholic mission.

This year, FOCUS chose Philadelphia to be one of four cities to host REACH. The goal was to “reach” out further into the Catholic community to offer those in attendance an opportunity for encountering Jesus Christ in the Eucharist, for gathering in prayer, for hearing from inspiring speakers and for being equipped to take part in the New Evangelization.

The day began at 6:30 a.m. with the rosary led by Catholic apostolates in the Philadelphia area: the Catholic Leadership Institute, Generation Life, the Theology of the Body Institute, the King’s Men and St. Joseph’s Outreach.

Archbishop Charles J. Chaput, O.F.M. Cap., celebrated Mass along with 12 concelebrants.  In his homily, the Archbishop reminded those gathered not to be Catholics who play it safe but those who are unafraid to take risks for the Lord.

After Mass, Brian Gail, author of “Fatherless,” introduced the topic of the New Evangelization.  Sister Joseph Andrew Bogdanowicz, O.P., spoke of truth, love and courage, highlighting that all are necessary to face the culture.  She recalled that “there is no freedom without truth” and that “truth sets us free to love.”

Keynote speaker George Weigel explained the historical perspective of the New Evangelization.  He noted that after the Second Vatican Council, the Counter-Reformation Catholicism period of Church history transformed into a period of inviting people to encounter Christ through the Gospel, which is needed in today’s culture. 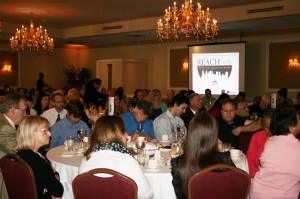 He explained how influential Blessed Pope John Paul II and Pope Benedict XVI have been in articulating what the New Evangelization means after Vatican II, noting that they are the last Holy Fathers who were present at the Council.  Both had explained that the faith is both rational and relevant to our culture, all while encouraging the faithful to be courageous in spreading the truth of Catholicism.

The Church can no longer be defensive about Catholicism but must be “offensive.” He also noted that the pontificate of Pope Francis has been one of conversion and action.

Among those who attended REACH, Jim Longon from Flourtown felt motivated.  “I was inspired to see 200 people gathered at 6:30 in the morning, many of whom had travelled over 45 minutes to attend. I returned home and told my wife it was well worth the sacrifice to attend!”

Father Shaun Mahoney, chaplain at Temple University’s Newman Center, said, “The eye-opening and graced gathering of over 200 people at the FOCUS Philly New Evangelization Prayer Breakfast assured us the Holy Spirit is alive and well and ready to act.  Thank you, FOCUS, for being agents of hope.”

For more information about how you can participate in the New Evangelization visit: www.focusequip.org

FOCUS is pleased to announce that with Archbishop Chaput’s blessing and Father Shaun Mahoney’s invitation they will be sending a team of missionaries to Temple University this fall.  Barbara Henkels from Plymouth Meeting was excited to hear the news. “With the support of Archbishop Chaput FOCUS has chosen one of the most vital institutions in Philadelphia in which to shine its beam of evangelization.  The student population at Temple is 30 percent to 35 percent Catholic.  FOCUS missionaries will find a receptive and talented student body in which to spread the Gospel of Christ.”

Nathan Stanley, regional director for FOCUS, said, “We are excited to partner our efforts in the New Evangelization with Father Shaun Mahoney and the Temple Newman Center next fall.   We feel truly blessed to have a FOCUS team present in the Archdiocese of Philadelphia.”

PREVIOUS: Putting the talents of parish youth to work

NEXT: Finding the good in the nation’s capital