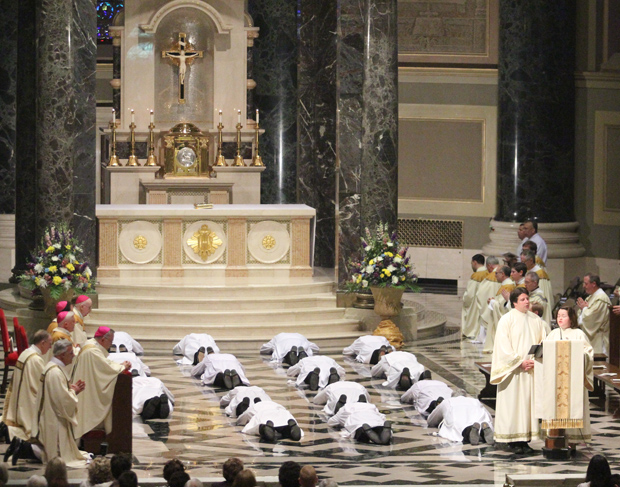 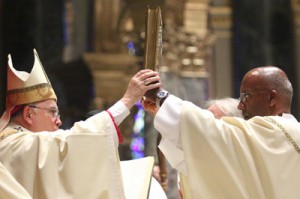 Archbishop Chaput (left) blesses Deacon William Bradley as he holds the Book of Gospels during the diaconate ordination liturgy June 1. at the Cathedral.

At a time when the dearth of religious vocations to convents and to the priesthood is epidemic, there is one bright ray of hope.

Archbishop Charles Chaput ordained 15 married men of the Archdiocese of Philadelphia to the permanent diaconate on Saturday, June 1 at the Cathedral Basilica of SS. Peter and Paul.

The diaconate, third in rank in ordained ministry behind bishops and priests, is second only to the episcopacy in ancient tradition, tracing back to the choosing of St. Stephen and six companions to assist the 12 apostles in their ministry, as related in the Acts of the Apostles.

Almost all of the new deacons are college graduates and in keeping with the trend of Catholic migration to the suburbs, only one is a member of a Philadelphia parish.

In his homily Archbishop Chaput explained how each of the three readings of the Mass can be applied to the deacons’ new station in life.

Most specific was the second reading from I Timothy that in conclusion states, “…those who serve well as deacons gain good standing and much confidence in their faith in Jesus Christ.” 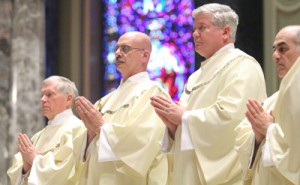 “As I look back on my own life, I have been a deacon now for 43 years and a priest for much of the same time,” the Archbishop told the new deacons. “One of the great blessings is the example of the faithful, the example of my brother deacons and priests and my brother bishops. It has taught me as the years go on to grow in my own faith in Jesus Christ. This has made me more confident of the faith that has been given to me and I hope that is the same in your life.”

Like most of the newly ordained deacons, Deacon Robert Lyle Benner has been assigned to his home parish, St. Agnes in Sellersville.

Franciscan University in Steubenville, Ohio, is well known as a nursery for many a priestly vocation, but it was while at Steubenville with his son for a conference that he first began to realize the Lord was calling him to something more. Given his state in life – married with children — it could only be the diaconate.

“After a year as an applicant I entered the program six years ago,” he said. “It has been a very long process but the time went very quickly.”

As a deacon he hopes to serve wherever the parish needs him. “I’m especially drawn to young adult ministry,” he said. “I do pre-Cana work now.”

As for Deacon John Rodgers, who will serve at St. Colman in Ardmore, his invitation came from an expert. Deacon James Owens, who has served as director of the Office for Permanent Deacons, is a very good friend who urged him many times to join the program. When circumstances permitted, he did so.

The process Deacon Rodgers found was a time of “growing in relationship with the other fellows and their wives. We had top-notch instructors and now we are ready to go.”

As a teacher of theology to students at Msgr. Bonner-Archbishop Prendergast High School, he is willing to serve the parish in any way it wishes but also utilize his new faculties at the high school. “I can be effective in both areas,” he said.

With candidates for the permanent diaconate who are married — and over the years most have been married — wives play an important role, accompanying their husband every step of the way. Their loving support is essential for the process.

“I’ve been blessed,” said Cynthia Bradley, wife of newly ordained Deacon Bill Bradley, who will utilize his new ministry at St. Raymond of Penafort Parish in Philadelphia and in his work as director of the archdiocesan Office for Black Catholics. “It’s been a very spiritual journey and I’m happy to have been on it with Bill.”

With this diaconate class now ordained, formation can continue for the many men in current formation including a group of Hispanic deacons expected to be ordained in 2015.

A new post has been created with Father Patrick Brady, a faculty member at St. Charles Borromeo Seminary, appointed Dean of the Permanent Diaconate program at the seminary.

Up to this time, candidates for the diaconate have received certificates for their studies before ordination.

New candidates, provided they already have at least a bachelor’s degree, as most do, will be able if they wish to enter a program that will give them a master’s degree in theology, the same degree most candidates for priesthood receive.

William Rutledge of St. Catherine of Siena Parish in Horsham, who will be entering his second year in the diaconate program, was on usher duty at the Cathedral during the ordination ceremony. He will not be eligible for the master’s program, although most of his classmates will, because he has only an associate’s degree, he explained.

That’s fine with him because “my personal journey has been remarkable,” he said. He entered the program at the urging of his wife and does not regret it. “The Lord has a plan and I just have to say ‘Yes,’” he said. “There is a lot of spiritual growth, and how do you put a value on that?”