At 50 years old, Christ the King Parish proud of much, including its school 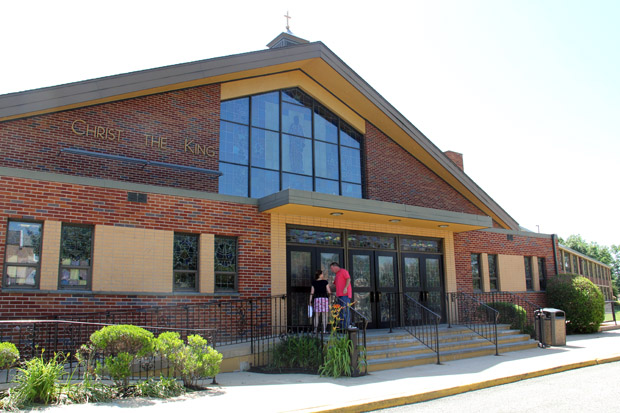 Christ the King Church, located in the Morrell Park section of Northeast Philadelphia, celebrated its parish anniversary June 23 with a Mass celebrated by the pastor, Father James Callahan, 50 years to the day since its founding. (Photos by Sarah Webb) 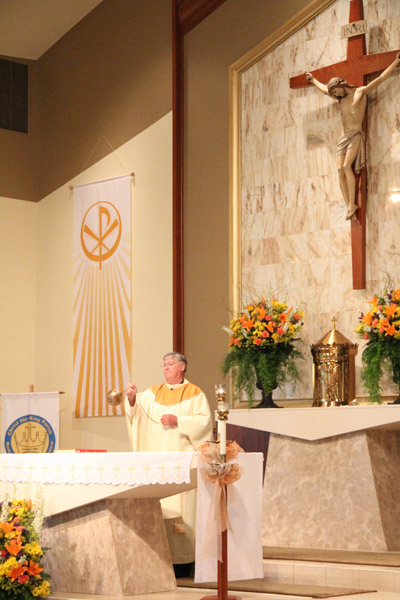 Father James Callahan incenses the altar during Mass for the parish’s anniversary June 23.

When Father James Callahan celebrated the 50th anniversary Mass for his parish, Christ the King, in the Morrell Park section of Philadelphia on June 23, it was on the exact date that the very first Mass was celebrated by Father Arthur Woods, the founding pastor.

Back in 1963 when the parish was established as a spin-off of St. Katherine of Siena, there was no church, so Mass was celebrated at St. Michael’s Shrine of the True Cross in nearby Torresdale.

No reason was given by the Archdiocese of Philadelphia for the choice of the name Christ the King, but maybe it should have been named for St. Joseph. The old Morrell Estate, on which the parish was centered, was christened San Jose by Louise Drexel Morrell and her husband Edward.

As a matter of fact she also built St. Michael’s on the adjacent property, which had been her own family’s summer home and in the 1950s was a retreat house conducted by the Sisters of the Blessed Sacrament.

St. Michael’s remained the parish worship site for a year and a half until Christ the King Church was built. The property is now the Torresdale Campus of Aria Hospital.

The school was established almost immediately but for two years it occupied space in St. Jerome School, with its own distinct faculty of Sisters of St. Joseph.

The school was ultimately built and although the faculty today is mostly lay teachers, there are still St. Joseph Sisters; Sister Trudy Helder, the school’s principal, has 25 years at Christ the King.

The biggest change she has seen is in technology, which “is such a big piece of education.”

“Now the junior high students (seventh and eighth graders) are permitted to bring their own electronic device(s) to school and incorporate them into the learning,” she said.

“I love Christ the King. It is extremely active with pluses in so many facets,” Sister Trudy added.

One of the more recent additions is a youth group organized by Father Michael Speziale, a faculty member of Archbishop Ryan High School who is in residence at the parish.

The family of Fran McNeil Williams moved into the area in 1962. At first they worshipped at St. Katherine, then at St. Michael’s. In those early years “it was all young families with tons of kids,” she said. “There was hominess to the neighborhood. We grew up together. My three children went to the school and now Sister Trudy has the grandchildren of the first children in the school.” 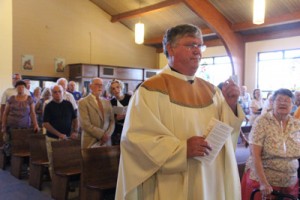 Parishioners of Christ the King sing the entrance hymn as Father Callahan processes into Mass June 23.

George Gerlach has been an active member of the parish for 32 years. “It was very welcoming when we came,” he recalls. “There were a lot of firemen and policemen to the parish, and we were the second owners of our house.”

Gerlach and his wife, Tina, raised five children in the parish and school, including his eldest who has entered the Sisters of the Holy Family.

Another notable vocation from the parish is Msgr. Joseph Prior, pastor of St. John the Evangelist, Morrisville, and former rector of St. Charles Borromeo Seminary.

As is the case of many churches in the Northeast and the suburbs that were hastily built because of the sudden influx of Catholics, Christ the King was somewhat austere, without the ornamentation found in older churches. This was alleviated by pastors in later years.

The beautiful stained-glass windows that now grace the church were originally from Our Lady of Pompeii Church on Erie Avenue, an Italian national parish that closed in 1993. They were obtained by then-pastor Father Henry Birkhead. There is also a large window depicting Christ the King above the entrance.

More recently, under Father Callahan, a large painting executed by Brother Mickey McGrath, O.S.F.S., which commemorates the many police officers and fire fighters who died in the 9/11, 2001 tragedy, was placed in the rear of the church. Also under Father Callahan, as part of the parish’s 40th anniversary, there was a joyful mortgage burning that celebrated the final payment on the parish debt. 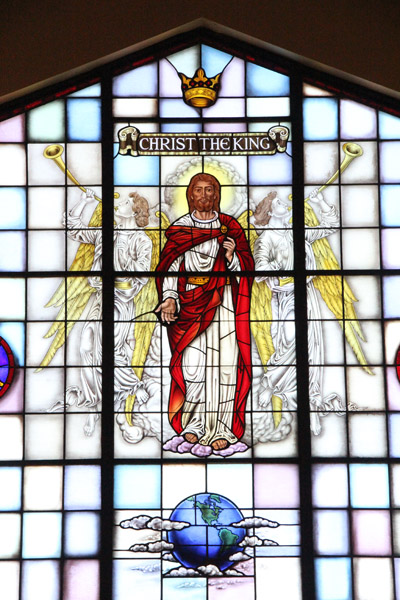 Now 13 years into his pastorship, Father Callahan leads a parish with about 5,400 members and a school with 340 children.

Christ the King’s website lists 36 different programs and groups, ranging from the usual –pastoral and finance councils, eucharistic ministers, lectors, senior citizens, etc. — to the more unusual, including intramural softball, Elizabeth Ministry to support women and their families, King’s Gardeners to maintain the grounds, Little People’s Church for children in kindergarten and first grade, a bereavement group, in plain words from the cradle to the grave and all stops in between.

But of all the ministries the pastor is most proud of, “It would be difficult not to lead with the school,” Father Callahan said. “Since our inception the school has been blessed with the work of the Sisters of St. Joseph.”