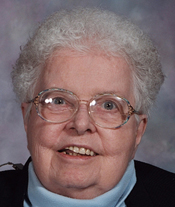 Sister Clare Marita Pearce, O.S.F., 88, died July 22 in Assisi House, Aston. She had been a professed member of the Sisters of St. Francis of Philadelphia for 66 years.

Sister Clare Marita (Clare Elaine Pearce) was born in Philadelphia where she was a member of St. Columba Parish in North Philadelphia and a graduate of John W. Hallahan Catholic Girls’ High School.

Prior to her entrance into the congregation, she worked as a file clerk at the civil service office of the U.S. Army, 3rd Service Command in Philadelphia. She entered the congregation in 1944 and professed her first vows in 1947.

Sister Clare earned a B.S. in education from Mount St. Mary University in Emmitsburg, Md., and an M.A. in library science from Villanova University. She ministered in education on the elementary, secondary and college levels as both teacher and librarian.

In 2002 she moved to Assisi House where she served in prayer ministry until her death.

Sister Clare Marita ministered in the Diocese of Wilmington for nine years and in the Archdiocese of Baltimore for nine years. Additional ministry experience included teaching at Catholic schools in Whitehall and York, Pa.

Sister Clare Marita is survived by her sister, Nancy Williams, nieces, nephews, and by her Franciscan family. Donations in her name can be made to the Sisters of St. Francis Foundation, 609 S. Convent Road, Aston, PA 19014.