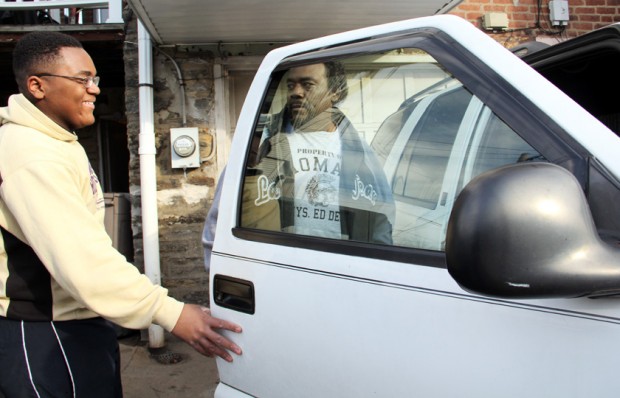 Alvin Chiverton (left) gets ready to drive his father, Alvin Sr., to a doctor’s appointment.

Most parents can tell you: Getting kids in their teens to Sunday Mass is often a hard sell involving a bit of coaxing or nagging.  But you haven’t met Alvin Chiverton, a junior at Roman Catholic High and a member of St. Athanasius Parish, where he attended school from kindergarten on up.

“I never thought I would have a son who would be dragging me to church,” confessed his mother, Anita Plumer. “He’s always on his sisters to go to Mass, and we go together. His best grade in school is religion. He has rosaries all over the house.”

Alvin is the kind of kid who doesn’t put himself into the limelight. On the surface he’s an average guy who gets average grades and has average ambitions, and doesn’t have a clue why anything should be written about him. He doesn’t think of himself as special at all. Other people do.

Alvin was a recipient of the Chaplain’s Award presented by the Knights of Peter Claver in November at their annual banquet.

In nominating him for the award, his pastor, Father Joseph Okonski, pastor of St. Athanasius, said, “Alvin is a very unique person, in that he has taken on a great deal of responsibility for a young man. His father is on dialysis, and when Alvin is not in school he drives his father to the treatment facility. Throughout grade school he was not influenced by others and he did not follow the crowd but remained solidly himself.”

Alvin’s dad (Alvin Chiverton Sr.) has been fighting kidney disease since 2008, and his son has practically been his nurse, his mother said. Alvin got his driver’s license about four months ago, and very often he drives his father for treatment in the family ’s 96 GMC Jimmy.

“Alvin is my friend and he is our only son,” his mother said. “I lost my job and my husband has kidney disease. We got a lot of help from Bishop Herbert Bevard (former pastor of St. Athanasius), and Father Okonski helped get Alvin into Roman Catholic. We feel so blessed.”

But if he can’t go because of school, “I try to race home, because after being on the machine for five hours he can’t drive and I bring him home,” Alvin said. “He needs another kidney. He’s sort of my best friend and I love him to death. My mom has been through a lot and I’m proud of her.”

Ever since he was in eighth grade Alvin has been helping out at the school and rectory. 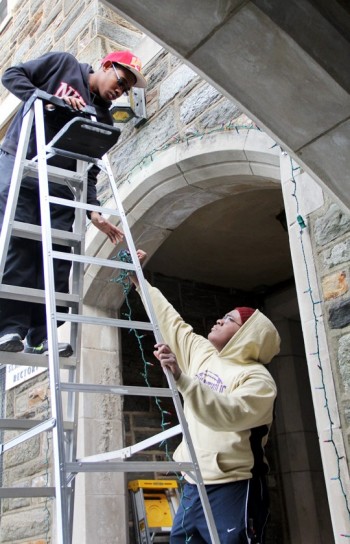 In other matters, Alvin has always loved sports, especially baseball. Although he is not on a school team this year he works out regularly in Roman’s gym. He has a girlfriend, Tanisha, who is a sophomore at Girls High, and he’d like to save enough to get his own car.  His two older sisters, Channell and Shante, are in college. And he intends to go to college also, perhaps West Chester University.

“One Saturday Father Okonski called myself and another kid and asked if we could help and I’ve been doing it ever since,” he said. “I clean up and if there is something I can fix, I’ll fix it.”

Alvin does get a small stipend from the parish for his work, but he does much beyond what he is asked to do.

“It started when we got funding from the St. Vincent de Paul Society to help provide young people with work and Alvin was one of the ones I thought of for a little summer position,” Father Okonski said. “That’s when I got to learn a little bit more about him. He comes every Saturday to help clean the church and at other times for special events. He might call and ask if we need help for anything. We recommended him to Roman but he got accepted on his own merits. He’s a quiet person, very low key but strong in his convictions.”

Father Okonski isn’t alone at St. Athanasius in his appreciation of Alvin’s qualities. “He’s sociable, polite and respectful,” said St. Joseph Sister Catherine Bones, the parish Coordinator for Religious Education. “There is nothing you could ask him to do that he wouldn’t do, but he doesn’t expect anything back; he is unassuming.”

As for career plans, maybe he will join the military or be a police officer or firefighter.

“He would make a great politician,” his mother said. “Everyone loves him.”

PREVIOUS: The gifts we give, the stories we tell

NEXT: Is there room for the Christ Child in our hearts?