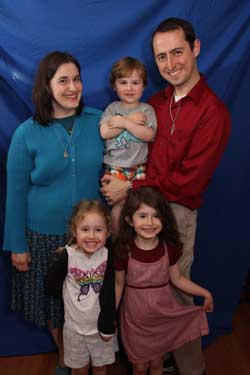 Jim and Jen Volpe and their three children are members of Mother of Divine Providence Parish in King of Prussia. Married for 10 years, they teach Natural Family Planning through the Couple to Couple League.

“What’s the matter with you,” he shouted, looking from my screaming, writhing one year old to me. As I straightened to face him, I was on the defensive, but I tried to laugh off the remark, saying, “Nothing’s wrong with him, he’s just cranky and needs a nap.” “You’re a bad mother!” he thundered.

That did it. Now, I knew everyone in the food court heard that, and they were all looking to see what would happen next. “No, I’m not! He’s only one and he’s cranky. What would you like me to do, gag him?”

Ugh. Not my best moment. But after repeating himself, the man went off in a huff to continue reading his paper. I hurried the girls and the stroller away from that place as fast as I could, feeling many eyes still on us and fielding questions from the two girls.

By the time we’d reached the department store, I was shaking and nearly in tears, so I had the girls kneel down with me in prayer right there between the clothing racks. We prayed for the “grumpy man,” to be able to forgive him and that he would find peace, and for mommy to calm down.

Feeling somewhat better, and able to go on, we got up and moved out of the store, those words still ringing in my ears. “You’re a bad mother!” I think those words live in the heart of every mom. Every time something doesn’t go as planned or every time someone makes a comment about what you should be doing or even just how they did it differently, that fear rises up to stop you from moving forward in peace.

The best counter to this fear is to turn to Mary, the Blessed Mother. Though Mary was greatly blessed this does not mean that she did not struggle in her motherhood. By praying the rosary and meditating on the mysteries, we can learn from Mary how to handle our own struggles with doubt and fear.

From the moment of the annunciation, she knew that this blessing would require great things of her, great sacrifice and even public scorn, but she also knew where to turn for the strength to bear this responsibility. Mary’s Fiat, “Be it done unto me according to your word,” was only possible because of her profound trust in God.

Throughout her life, Mary’s response to talk of her Son’s greatness, or predictions of the suffering she too would endure, was to ponder these things in her heart. This doesn’t mean the worried stewing that we often do, but instead an awe-filled wondering, waiting for God’s will to come about, for His plan to unfold.

Pondering the events of that day, I realize that only the Lord knows what fruit may come of that exchange. Perhaps a young mother was strengthened to speak charitably to her next critic. Perhaps a critic vowed to stop criticizing after seeing the anguish on my face. Perhaps someone in the department store offered a prayer for me when they saw me praying between the racks.

Like Mary, I must trust in God and know that suffering is not defeat. Turning to Mary and meditating on her life, I may find the peace which she had while resting in the Lord’s care, able to overcome fear and doubt, whether from voice within or without.

PREVIOUS: In beauty and hard work lie the gifts of marriage

NEXT: The young and the blessed