Postures of prayer: This year, try a new way to pray 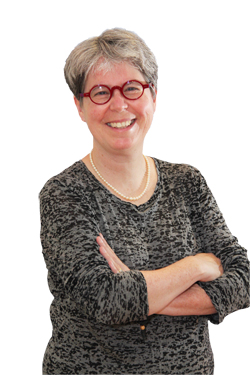 Michelle Francl-Donnay is a wife, mother of two, professor of chemistry, writer and blogger (see Quantum Theology). She is a member of Our Mother of Good Counsel Parish in Bryn Mawr.

“What else can’t you do that you would like to do?” asks my physical therapist at our first meeting, after cataloging a list of things I couldn’t do:  go down stairs, go up stairs, put in the clutch on my car so I can repossess it from my 16 year old. “I would like to be able to kneel to pray,” I admitted sheepishly.

I fell and badly injured my ankle just before Christmas, and had a tough time finding a comfortable position to do anything from watch a movie to sleep. Prayer was no exception.

Despite attempts to convince myself that kneeling or lying on the sofa to pray didn’t matter, my prayer felt as off balance as my first attempts to get down the stairs on crutches. I shouldn’t be surprised, suggests Benedictine monk Gabriel Bunge in his book on the practice of prayer, we pray with our entire being: body as well as soul. The positions we use for prayer support and sustain our efforts. The injury to my ankle had dinged my prayer as well.

Father Bunge notes that while kneeling is the posture most of us think as “proper” for prayer, our tradition offers us a much richer set of potential positions for prayer. St. Dominic’s monks, watching him pray, noticed that he used his body in different ways to reflect his attitude toward God in prayer, which they called his “Nine Ways of Prayer.”

Dominic is described as bowing in humility while praying, praying face down on the floor overcome with sorrow, standing expectantly with his arms outstretched as on the cross. He would pray with his hands open like a book seeking God’s wisdom or his hands raised high above his head, reaching toward the source of all grace. Dominic prayed and meditated in motion: genuflecting before the altar and while walking. And he prayed with pain — something I could relate to these days.

Faced with all these choices, I thought of St. Ignatius of Loyola’s advice regarding posture: experiment. Kneeling, lying on the sofa, prostrate on the ground — be attentive to what leads you to God. Once you have found what you seek, noted Ignatius, don’t fidget, and above all do not be anxious, but be at rest in God.

I still sometimes walk a bit like Igor in a Frankenstein movie, clumping along with my foot in its stiff boot, but my prayer doesn’t feel nearly so awkward. I have discovered not only new ways to stretch in my prayer life, but a new willingness to surrender my preferences to God.

In 2013, consider experimenting a bit with posture in your private prayer. Try an unfamiliar position, perhaps one of Dominic’s ways of prayer. Do as Ignatius suggests: see what happens. Does this position lead you closer to God? Can you be at rest with God in this way? Try different positions for different types of prayer. Does one suit better than another when you want to thank God for a gift?

Stretch your prayer life a bit, even if it takes a bit of effort or feels uncomfortable at first. Our souls are strengthened in this exercise of our bodies.

PREVIOUS: Life — serving others — is beautiful