The young lead the younger to the Lord 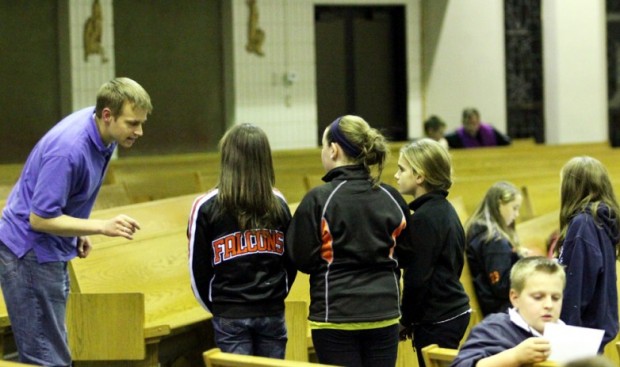 Michael Kulig (left) from Akron, Ohio helps students prepare for the sacrament of reconciliation during a retreat at St. John the Baptist Parish in Morrisville.

“Have van, will evangelize” would be a good motto for NET Ministries, a Minnesota-based Catholic outreach program that sends teams of young adults around the country to share the Good News at small retreats, mostly for middle school and high school students and parish youth groups.

NET is an acronym for National Evangelization Team, and it was founded by Mark Berchem in 1980, originally as an offshoot of the St. Paul Catholic Youth Center. From its Midwestern beginnings its reach has spread throughout the country. At this time there are 11 teams, each composed of approximately 12 members (think 12 apostles). They drive a large van with a trailer in tow containing their luggage, which is limited to one suitcase and one backpack per person.

NET could also symbolize the nets Christ commanded his first followers to cast as fishers of men. Like the apostles, the team members usually do not come to the work with advanced degrees; apostolic zeal makes up for that.

The team members may range in age from 18 to 30, and they sign up for nine months of service, perhaps right after college or high school but not necessarily, and the term may be renewed for a second year.

To start with they must raise about $4,500, which covers their initial one-month training period, and they will receive a stipend of approximately $100 a month for incidental expenses.

Because the team members are young themselves they may be able to connect with the students in a way older priests and teachers might not be able to do.

“I really felt the parish should have more of these events, it was really fun. It wasn’t all religious yet religion was an important part of it,” said Megan Gibson, who attended the confirmation retreat at St. John the Evangelist. “I enjoyed being with the NET group kids; they were very kind; a lot of fun and I would definitely like to participate again.”

Charlie Gormley also attended the confirmation retreat at St. John the Evangelist. “I liked that we did small groups and I liked the speech from (team co-leader) Mike,” he said. “I wanted to go to the next retreat they are having tomorrow night for junior high at our neighboring parish.” 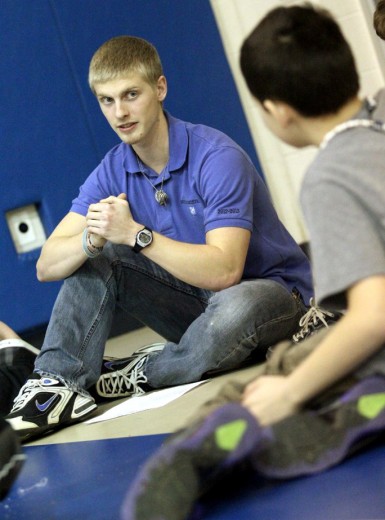 Andrew Calhoun leads a group of students from St. John’s during a recent retreat at the parish.

In arranging the program, it helped that several of the parish youth ministers themselves were former NET missionaries. For example Joe Grayeske, who is youth minister at St. John the Evangelist and St. Ignatius, performed NET ministry for the year following his 2004 graduation from Penn State University. He learned about it through a presentation given at PSU’s Newman Club concerning Catholic volunteer programs.

He was from Pennsburg, which is a small town in far western Montgomery County, and NET service “opened me up to life outside of my parish,” he said. “The training was intense; daily Mass was part of the experience.”

Although he is now married and a father, the experience was so indelible he wanted to bring it to the Philadelphia Archdiocese.

He and Bobby Moren, a Cabrini College graduate who is the youth minister at Corpus Christi and another former NET volunteer, wrote to Archbishop Chaput requesting permission to invite the group to the Philadelphia Archdiocese. The permission was granted, and NET assigned Team 4, which earlier this year was operating mostly in New England. During their stay they spent nights mostly with host families or in parish or school facilities.

The retreat can include talks to the entire group, role playing, skits and small-group sessions. The teams are deliberately divided evenly between men and women, because in the small group sessions boys and girls are divided and the NET volunteer who leads the discussion is of the same sex as the participants. “We’ve been in 15 states so far,” said co-leader Veronica Rincon, 24, who is originally from Los Angeles and was a political science major at Citrus College in Glendora, Calif. Before coming to NET she was involved in youth ministry in her own parish. She has been impressed with the level of interest among the youth they have encountered in the Philadelphia area. 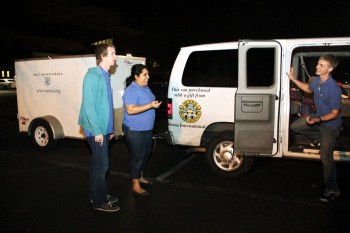 “Ninety percent of them are open to a relationship with God,” she said. And even among those who might enter the retreat with a different attitude, “by the end they are totally different,” she added.

A personal relationship with God is what NET is all about, and what it has mostly going for it is the youth of the team members, which give them a greater rapport with the teens.

Obviously the NET team members have a certain spiritual ground already or else they never would have volunteered. Even so, they too benefit, all agree.

“It’s not what I expected. It is more,” Veronica said. “We are a team and we try to bring each other to holiness and love one another. I didn’t expect to be challenged or grow. You are called to love; to be the person you were meant to be.”

Brian Stoydil-Mulholland, who is youth minister at St. Mary Magdalen Parish and a senior at West Chester University, heard about NET during a youth conference at Franciscan University in Steubenville, Ohio. He was only 18 and a graduate of Gonzaga Prep Spokane when he volunteered in 2009 from May to August 2010.

“We were trained to be a team, and at times it was challenging,” he recalls. Clearly it was rewarding for him, because he recommended the program for the parish eighth grade retreat. Of his group of six men, “we have two guys in the seminary,” he said.

NEXT: The gifts we give, the stories we tell