To heal, to serve, to love 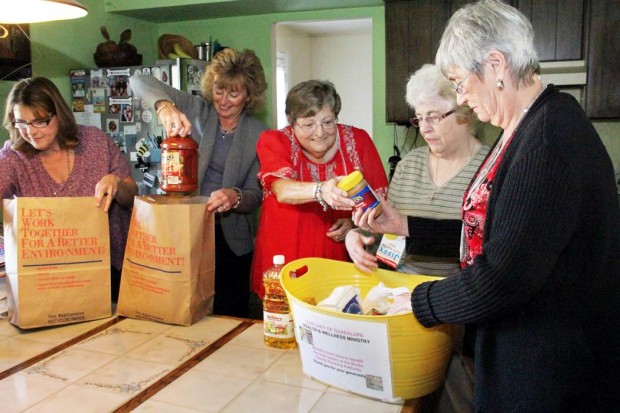 Members of the Health and Wellness group at Our Lady of Guadalupe Parish in Buckingham, Bucks County, include from left, Linda Glavin, Sue Gavel, Maureen Sapelli, Nancy Nelson and Estella Gano. The are packaging items for a Doylestown homeless shelter.

Next to worship social outreach is or should be the most important work of any parish. Come to think of it, it really is a form of worship. Some parishes do this very well, and if you dig down, although it takes the combined effort of many generous people, often as not there is either one dedicated person or a small group who really make it happen.

At Our Lady of Guadalupe, a very young parish in Buckingham, Bucks County, hands down a spark plug for social ministry is a retired physician, Dr. Maureen Sapelli, 60, or just plain Maureen, as she prefers to be called. It is also something she would not have dreamed remotely possible not too long ago.

It really started about five years ago, when in response to a note in her parish bulletin, she attended a parish nurse meeting at St. John Bosco to promote Health and Wellness ministries in local parishes.

She came back to Our Lady of Guadalupe on fire with the possibilities and immediately started a parish ministry with four volunteers, which is now up to about 30.

At first it was just a matter of performing blood pressure screenings and sponsoring a few lectures, but it just grew from there. Now the group visits the homebound, it takes meals to people who are home from the hospital and in some instances it provides respite care. For example one man who was practically housebound because of his wife’s severe Alzheimer’s disease was provided relief every Thursday just so he could go bowling. The group also works with a Doylestown homeless shelter, sponsoring one of the families in residence and providing extensive aid throughout their stay. For the shelter as a whole they have a vigorous food collection program for the poor, conducted both in-parish and at a local supermarket, as well as clothing drives. This year Thanksgiving food baskets will be added.  Their semi-annual blood drive typically results in 80 donated units of blood. An upcoming parish program in cooperation with Doylestown Hospital will discuss end of life issues. A spin-off Prayer Shawl Ministry provides prayer shawls to the sick and the elderly and also baby blankets for all babies who are baptized in the parish.

None of this would have been remotely imaginable to Maureen a decade or so ago. 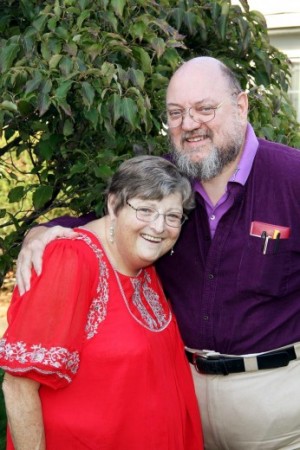 She grew up Maureen McDonald in Morrisville, first in Holy Trinity Parish, then St. John the Evangelist when that was founded. As a child and teen she attended Mass regularly with the family; but then at Tufts University her spiritual life started to slide as so often happens. “I would go to Mass if I wasn’t busy with something else,” she recalls. Then she went on to the University of Pennsylvania to study medicine, and with her busy schedule as a med student and intern at Penn and later Temple University Mass attendance really slipped.

Life was good, even if God did not have a major role in it. She was looking forward to a medical career probably with rheumatology as a specialty.

Then Maureen’s whole world began falling apart. At age 27 she was diagnosed with Adult Onset Still’s Disease, a particularly nasty form of rheumatoid arthritis. Although there were periods of remission, it has remained with her ever since. A common treatment for the disease was steroids, and in her case prednisone which helped some, but not much. The steroid also has unpleasant side effects. For one thing it raises blood sugar levels, and so for the past 20 years she has been taking insulin for diabetes, and just nine years ago she was diagnosed with Parkinson’s which has been fairly controlled. The irony was not lost on Maureen, in that she was a suffering from a particularly debilitating form of rheumatism, which was within her own specialty. “I had incredible empathy with my patients,” she said.

The bottom line, mostly because of Still’s she underwent approximately 150 hospitalizations, and ultimately, at 45 she had to retire from medicine, which was devastating, because her entire self-image revolved around her role as a physician, helping others.

Maureen truly was one of the “poor in spirit” of whom Jesus tells us “will inherent the kingdom of heaven.” She could not realize the suffering face of Christ was no further than the image in her own mirror. 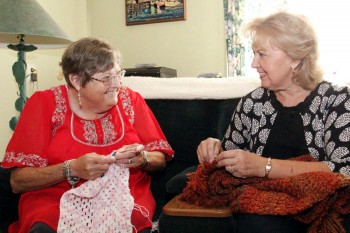 Sapelli (left) and Dorothy Zolnoski enjoy working in the prayer shawl ministry of Our Lady of Guadalupe Parish, Buckingham.

Her spiritual life was a roller coaster. At times of crisis she might want to see a priest to go to confession, but at other times more often than not she was depressed. God didn’t love her because she was a bad person, she would think.

She worked through her depression through volunteer work with Big Brothers and Big Sisters, and through teaching literacy and English as a second language.

A major turning point came about nine years ago when Maureen started taking another medication Humira, which not only controlled the Still’s disease and eliminated the constant cycle of hospitalizations for such things as pleurisy and peritonitis and  it greatly reduced the amount of steroids she needed which in turn placed her diabetes in better control.

One of the side effects of the steroids had been a very large weight gain; Maureen estimates about a hundred pounds. This too had affected her self-image and she had long ceased dating. Now she lost a good portion of that and with her restored confidence she developed a social life, and through match.com she met Carl Sapelli, a widower whom she married six and a half years ago.

With emotional wellness came spiritual wellness and attending Mass with Carl became a thing of joy not a chore. “Celebrating the Lord’s sacrament with someone I love has made it so much more meaningful,” she said.

Maureen Sapelli is no longer Dr. Maureen McDonald; that part of her life is a closed book, but the altruism that was always part of her being is funneled through Our Lady of Guadalupe Health and Wellness Ministry and the Prayer Shawl Ministry.

“I feel like medicine was a whole different lifetime from the life I live now,” she said.”I do what I want to do, not what I have to do but I keep busy with the two ministries.”

She does have physical limitation, for example, although she is a Eucharistic Minister, she limits that role to taking Communion to shut-ins. The slight tremor from her Parkinson’s would make it impractical in the church setting.

Many, many volunteers do most of the physical work and none more so than Carl. “My husband is so very supportive of all the work I do,” she said. “He never complains. He helps me with the food and clothing drives, he does tons of computer work for me. I can do email, surf the web and do word, but that’s about it. He can do anything.”

“She is just marvelous, so kind and good,” Carl said. I don’t feel I do anything to help, but if I do, that’s good. I’ve always been a fan of volunteerism so it is exciting to be given a chance to give back. She (Maureen) seems to do that for a lot of people, she gives them the ability to give back.”

Yes, there are still physical problems for example degenerative arthritis in her back and a knee replacement last year, but Maureen is in a good place in her life and now knows God loves her, and it is reciprocal. “I just love God so much now it is incredible,” she said.

PREVIOUS: The young and the blessed

NEXT: The problem of joy