‘A true family in Christ’ 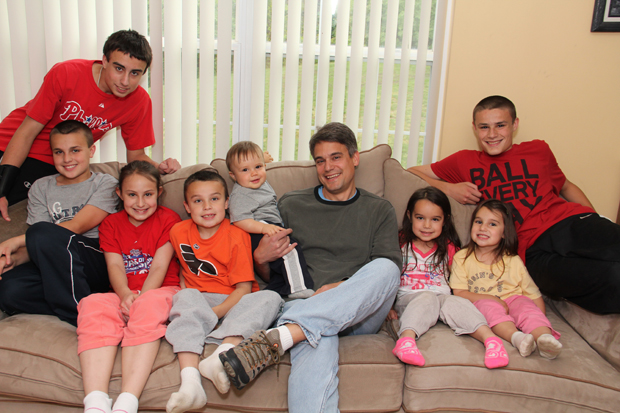 Parish family, community rally to help one of their own in need

(This story originally appeared in the June 2012 edition of Phaith Magazine.)

Forget about the violence and evil in the banner newspaper headlines and the evening news. There are a lot of good people out there who step forward when it counts, without any idea of publicity or earthly reward. Larry Ambrose and his family know the truth of that.

Last year, when tragedy struck, so many people came forward, folks from his parish, St. Joseph’s in Downingtown, neighbors, friends and family, others from nearby parishes and people who didn’t even know him.

Taking it back to the beginning, Larry met Chris Federico in Sea Isle City, N.J., on Aug. 3, 1991. It was his 25th birthday and what a birthday present; it was classic love at first sight. In less than a year, they were engaged. They married on Sept. 11, 1993.

Larry was in sales and marketing. At first, they lived in Maryland and New Jersey. In 1998, they moved back to Chester County, where they were both raised, and settled in St. Joseph Parish.

By this time, the kids were coming along – Larry who is 16; Jordan, 14; Zach, 12; Celeste, 10; Simon, 7; Faith, 6; Carmel, 3; and Solomon, 1. Young Larry is a sophomore at Bishop Shanahan High School; Jordan through Faith attend St. Joseph School; Carmel and Solomon aren’t in school yet.

Chris was a stay-at-home mom and had been from the day she discovered she was carrying her first child. Her work was in a biology lab and she worried she might bring something home that could harm her baby. With their family growing, being a mom became Chris’ passion, her vocation. She was a good mom and a good wife, and a woman whose faith got stronger with the years.

Larry’s work with General Electric Co. took him away from home sometimes for weeks at a time, in places all over the globe. She had to be the ever-present rock.

Last May, when little Solomon was just 2 months old, life was good. One night Chris and Larry had to go to a viewing for a friend, a young mother who had died of cancer.

Later that night, Chris, in a reflective mood, commented to Larry that she wasn’t sure she was ready to go to heaven if something happened. He told her he couldn’t imagine anyone more ready than her. 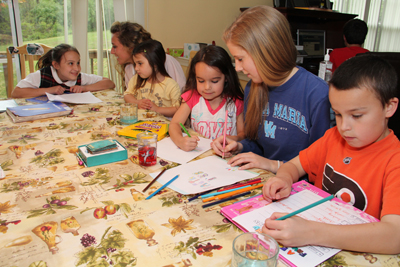 On May 12, 2011, Larry got up before dawn, kissed his sleepy wife goodbye and headed for Charlottesville, Va., for a company meeting. Later in the morning, a call came through from his sister-in-law, Peggie McCarthy. He didn’t answer it immediately, thinking he would get back to her after his meeting. Another call came from the township police: His wife was seriously ill, and he should come home immediately.

Chris had been talking on the telephone with Peggie, when she said, “I think I’m going to pass out.” That was the last thing she ever said. The next thing Peggie heard was little Solomon crying. She knew something was seriously wrong. 911 was called and Chris was rushed to Brandywine Hospital, but nothing could be done; she was pronounced dead.

Meanwhile, a couple of his coworkers were driving Larry home, when he got the call from Craig Jones, his brother-in-law, telling him that Chris had died. At the hospital, he could only spend 15 minutes with his wife before he had to rush home to meet the school bus bringing his children home. He gathered them all together and asked them who they thought Mommy loved most in life. “Jesus,” was the reply.

“We were trying to do everything we could,” said Father Brian Kean, parochial vicar at St. Joseph’s who had rushed to the hospital when he received the news. “We brainstormed with family and friends for what Larry would need if he was going to take care of the kids.”

One of the first to act was Kathy Rhoades, a neighbor who, through an Internet program, set up a volunteer meal delivery program that would supply the Ambrose family with prepared meals for more than a year. The Rhoades family is not Catholic, although their children attend St. Joseph School. “My son Drew is in school with Jordan,” Kathy said. “Chris and I were close friends. I think we have more than 100 people signed up for food. They are mostly from sports programs, the Church and the neighborhood. You just want to help.”

Meanwhile, Larry took a leave from his job and just stayed with the kids for four and a half months, trying to replace Chris, who had done the bulk of the parenting because he was away on business trips so often. When he returned to work, General Electric gave him a position that could be filled at home, supervising a technical support team, so now he is, in a sense, a stay-at-home dad.

“G.E. worked to give me a position still in a leadership role, while attending to the evolving needs of my family,” he said.

“It’s been remarkable how many people have been there for Larry and the kids; St. Joseph’s has helped the family every step of the way,” said Taryn Jones, Chris’ sister. “Chris always was good and sensitive to other people; it made it easier.”

There are the meals and there are the people who volunteer to do the laundry. In November, Mike Bandru, the CYO track coach at St. Joseph’s, organized a 5K run to benefit the children’s education, according to Jones.

“It’s amazing how caring people have been,” she said. “Larry obviously has a profound loss and sadness, but his faith gives him the strength to go on.”

“The whole school community helps, even the teachers and staff,” said Immaculate Heart of Mary Sister Catherine Irene Masino, principal at St. Joseph’s. “They take part in bringing meals, shopping, laundry, driving the children here and there, and there are a lot of things behind the scenes.”

Last Christmas at the traditional school Christmas pageant, Jordan was the angel who carried Solomon, as the baby Jesus; other children in the family also were angels or singers, Sister Catherine noted.

She is especially impressed with Larry. “Mr. Ambrose hasn’t missed a beat. His faith is so strong. The children are supportive; they help each other.”

A great help to the family are Maeve O’Brien, who comes in the morning to assist, and Lucy Pawlowski, who comes in the afternoons, and is especially helpful because she is a teacher and can assist the children with their homework. Other volunteers include Emily Desiderio, a senior at Shanahan High School, and Mariah McHugh, a senior at Villa Maria Academy, who help after school with homework and play with the little ones and have become great role models for the children, Larry said.

Maeve used to baby-sit for the family, so it’s a natural for her. She volunteered after Chris died. “It was good for the children to have someone around they already knew,” she said. Maeve arrives very early in the morning, and at that time she especially takes charge of baby Solomon, while the rest of the family prepare themselves for school or other duties of the day. “They are great kids and they have a wonderful father,” she said.

Chris’ sister, Peggie, isn’t a member of St. Joseph’s, but feels part of it because she belonged to a parish prayer group that Chris hosted in her home.

“It’s so hard,” she said, “but people came out of the woodwork and just wanted to help as a really true family in Christ. We all want to build God’s kingdom.”

She is struck by not just the charity involved, but the real faith of the people and the family. “Larry is so gracious and trusting; you see faith at play,” she said. “Chris always said the world needs prayer, and they help each other with child-like faith. They have a kind of faith community that trusts in the mercy of God.”

But “Larry didn’t get faith because his wife died,” Father Kean said. “Every Sunday, he brings all of the children to Mass, usually at 10:30. I don’t think he sees what an inspiration he is.”

One of the things family and friends did last fall, near Chris’ birthday, was to go to her grave at St. Joseph Cemetery, where they recited the rosary.

“My wife was very devoted to the rosary,” Larry said. “I do think she is looking down on us. Sometimes I struggle and think this is a pretty heavy cross, but I’m at peace with what happened. Chris lived every day knowing life is but a stepping stone until you get to heaven. I’m comforted knowing that some day we will be together. That’s where faith comes in. The support that we have received is absolutely incredible. I don’t know where we would be without that.” 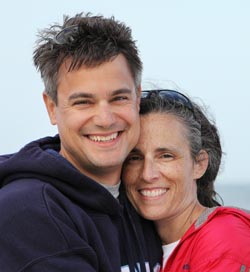 One year has passed since Chris died. The Ambrose family decided to mark the anniversary by doing things she loved. They started with morning Mass and then went down to the New Jersey Shore; after a run on the beach they had ice cream in Ocean City. After that they noticed a rainbow in the sky, which was unusual because it was not a rainy day. It was comforting because rainbows from the time of Noah have symbolized God’s covenant with His people.

Back home over the next few days there was a peacock in their yard. It perched on the swing set. Larry Ambrose said he has never seen a peacock outside of a zoo. Peacocks, in the early Church, were symbols of resurrection and eternity. “I would say, we’ve passed one year and we are receiving the message from God or Chris, ‘The journey is the most important thing,’” Larry said.

NEXT: Mass of Thanksgiving for Knights of Peter Claver