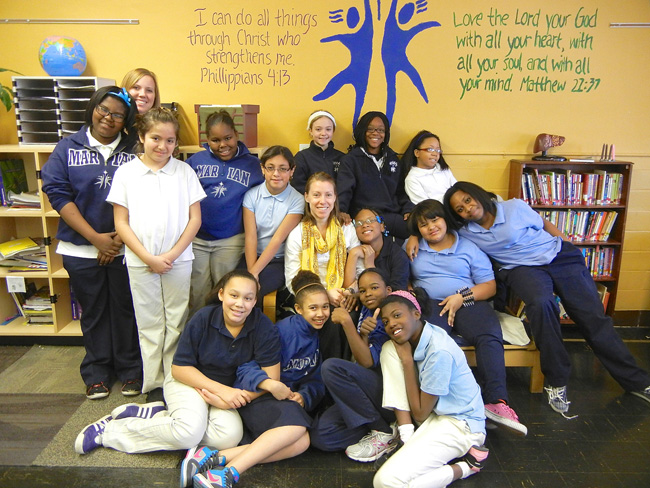 SAN FRANCISCO (CNS) — Some of Sister Chero Chuma’s friends back in Kenya think she wasted her visa to the United States by becoming a religious and joining an order of mostly elderly nuns in the Seattle area.

“It is amazing when you feel a call and you respond to a call. It is not that you choose to do that,” said the Sister of St. Joseph of Peace who recently enrolled in the nursing program at Seattle University.

“You want to say we are crazy joining right now,” said Sister Chuma, whose order has no formal habit but members wear a peace cross.

Sister Chuma was in California for a Giving Voice national gathering of about 75 religious from 30 different congregations at Notre Dame de Namur University in Belmont in early July.

Giving Voice was created by women religious in their 20s, 30s and 40s who are members of orders with diminishing membership — orders they feel they were called to join despite that demographic decline.

Giving Voice “provides a peer group in religious life for women religious who probably don’t have a lot of peers in their own congregations — strengthening their own sense of call in religious life,” said Sister Kristin Matthes, 47, a Sister of Notre Dame de Namur and a founder of the group that began in 1997.

Five years ago, the most common median age of religious women’s congregations was 76, according to the study commissioned by National Religious Vocation Conference.

“When I was discerning religious life, somehow through the Internet, I found out this group existed. The fact there were enough young nuns to form this group gave me the freedom to listen to the Holy Spirit,” said Sister Susan Francois, 41, a Sister of St. Joseph of Peace, who entered at age 34.

A 2009 study by the Center for Applied Research in the Apostolate found just 1 percent of all perpetually professed religious women were under 40. Three years later, a survey of men and women religious who professed perpetual vows in 2012 — conducted by CARA and commissioned by the U.S. bishops’ Secretariat of Clergy, Consecrated Life and Vocations — showed that their average age was 39.

Five years ago, the most common median age of religious women’s congregations was 76, according to the study commissioned by National Religious Vocation Conference.

“They’ll pray, and at 8 o’clock they go to bed,” said one young religious.

The future is likely to be “intercongregational” living, with religious from different orders sharing both living space and spirituality with each other, said Sister Francois, organizer of the Belmont event.

The key is “being open to whatever God can reveal to us. We can’t imagine yet what new things are to come,” said Sister Julia Walsh, 31, who belongs to the Franciscan Sisters of Perpetual Adoration. She’s a blogger and religion teacher at Aquinas High School in La Crosse, Wis.

Her order will celebrate 135 years of perpetual eucharistic adoration in August, she said. While her congregation’s average age is in the 70s, there are eight in their 30s, 10 in their 40s and 10 to 15 in their 50s, she said.

However, most of those in Giving Voice are one of two or three under 50 in their respective religious communities.

A February 2013 fact sheet prepared by the National Religious Vocation Conference, using CARA data, showed that those entering religious life today tend to be optimistic in their outlook, tolerant of differences among people, and positive in their attitudes toward authority.

It also said religious institutes are more likely to attract newer members if they have a strong Catholic identity, if they are hopeful about their future, if their members live together in community, and if they have a structured prayer life.

LCWR includes about 1,500 leaders of U.S. women’s religious communities, representing about 80 percent of the country’s 57,000 women religious. The Council of Major Superiors of Women, whose members emphasize more traditional elements of religious life such as convent living and distinctive habits, represents more than 100 religious communities and 10,000 members.

“I think the Holy Spirit knows we need both because both are a valid way,” said Sister Francois told Catholic San Francisco, newspaper of the San Francisco Archdiocese. “One is a more devotional, pious way, meeting that traditional religious need. Some are called the way I am called to be in the world for the world but to live simply.”

Sister Sarah Heger, a Sister of St. Joseph of Carondelet, said: “When I decided to enter, that was home, that was where I belonged.” The fifth-grade teacher, who graduated from Fontbonne University run by her order in the St. Louis area, and entered in 2005, said Giving Voice provides a peer group she can call on around the country.

“Religious life is going to look so different,” said Sister Heger. “To know there are people in that place of transition with me is just awesome.”