Pope says Mary is always near, helping the church face its trials 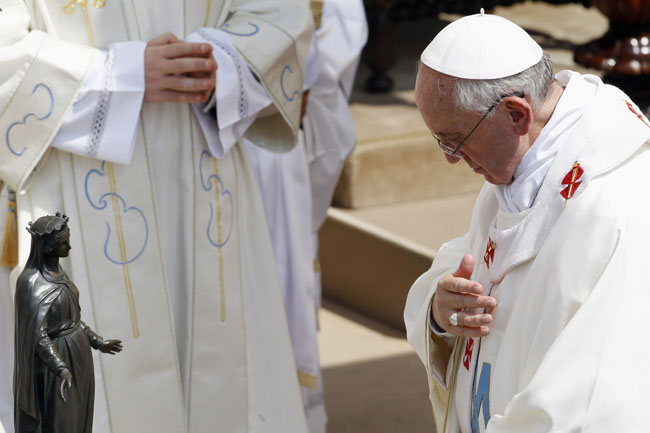 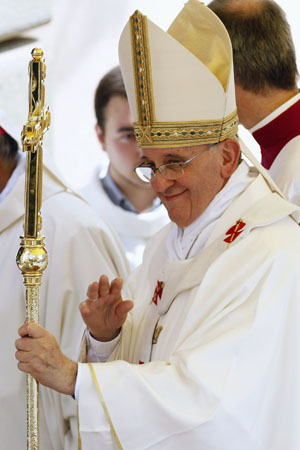 VATICAN CITY (CNS) — Mary, the mother of Jesus and mother of the church, already is in glory in heaven, but she is always with the church and helps it face the trials of the devil, Pope Francis said.

While the church is blessed and holy, on earth it continues to live through “the trials and challenges which the conflict between God and the evil one, the perennial enemy, brings,” the pope said in his homily Aug. 15 at a Mass for the feast of the Assumption of Mary.

The pope celebrated the Mass in the main square of Castel Gandolfo, a small town in the hills about 13 miles south of Rome where previous popes have spent the summer months. An estimated 12,000 were gathered in the square and down the main street for the Mass.

Commenting on the Mass readings, Pope Francis said the passage from the 11th chapter of the Book of Revelation — describing a woman in labor and a dragon waiting to devour the newborn child — represents the church “glorious and triumphant and yet, on the other hand, still in travail.”

But as the followers of Jesus continue to face temptation and problems, Mary remains at their side, just as she remained with the apostles during her earthly life.

“She has, of course, already entered, once and for all, into heavenly glory,” the pope said. “But this does not mean that she is distant or detached from us; rather Mary accompanies us, struggles with us, sustains Christians in their fight against the forces of evil.”

Pope Francis told the crowd that praying the rosary and meditating on the events of suffering and joy in the life of Mary and Jesus can give them the strength they need to continue “the battle against the evil one and his accomplices.”

“Do you pray the rosary every day?” he asked. The crowd shouted, “Yes,” and he said, “Really?”

The pope encouraged people to pray with Mary and to trust her as “our mother, our representative, our sister, the first believer to arrive in heaven.”

He said the Magnificat — Mary’s response to the Angel Gabriel: “My soul proclaims the greatness of the Lord …” from Luke 1:46-55 — is a song of hope, a song sung by “many saints,” including “moms, dads, grandmothers and grandfathers, missionaries, priests, sisters, young people, even children, who have faced the struggle of life” with the firm hope of the victory of the resurrection, “the victory of love.”

“Where there is the cross, there is hope,” he said.

“Every ‘yes’ to God is a step toward heaven, toward eternal life,” he said. “This is what the Lord wants: that all his children have life in abundance. God wants us all with him, in his house.”

Pope Francis also reminded people that Aug. 15 was the 25th anniversary of the day Blessed John Paul II signed his apostolic letter on women in the church and society, “Mulieris Dignitatem.”

As he had told reporters July 28 on the flight back to Rome from Brazil, Pope Francis said Blessed John Paul’s teaching “deserves to be taken up again and developed further.”

By meditating on the women in the Bible, “condensed in Mary,” he prayed, “may all women find themselves and the fullness of their vocations.”

And, he added, may all in the church recognize the “great, important role of women.”

The pope began his daylong visit to Castel Gandolfo by stopping to spend time with a group of cloistered Poor Clare nuns, whom he had visited July 14, the last time he spent a day at the papal villa.

PREVIOUS: Catholics and resuscitation; so what if a Mass lasts an hour?