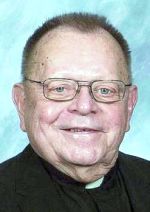 He was ordained May 27, 1950 by Bishop J. Carroll McCormick at the Cathedral of SS. Peter and Paul. He served as parochial vicar at St. Stanislaus, Summit Hill; St. Katherine of Siena, Philadelphia; St. Michael the Archangel, Levittown and Holy Angels, Philadelphia.

Father Chwieroth retired from active ministry in 1998 and at the time of his death was in residence at D’Youville Manor, Yardley.

“My wife Eileen and I knew him for more than 50 years, from when he was teaching at Cardinal Dougherty and living in Incarnation Parish,” said John Dolan, a close friend. “He performed our marriage and baptized our children. He was a good priest and had a tremendous sense of humor.”

For several years before moving to D’Youville Manor Father Chwieroth lived in retirement at Salem Harbor in the Torresdale section of the city. “He preferred a quiet life, and enjoyed going to the shore and the Poconos,” Dolan said.

“Ed had great faith,” said Msgr. Ignatius Murray, who taught with Father Chwieroth at Cardinal Dougherty. “We were good friends. He was a good educator then went on to parish work and hospital work; he was devoted to the priesthood.”