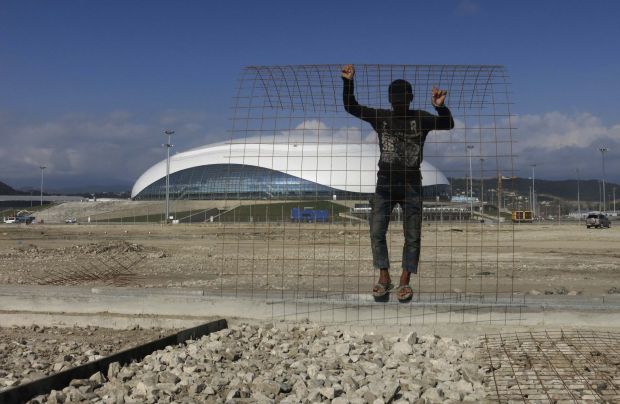 A worker lays down metal wire for a sidewalk in front of the Bolshoy Ice Dome in Sochi, Russia, Aug. 19. The arena will serve as the main venue for ice hockey during the 2014 Winter Olympic Games in February. (CNS photo/Gary Hershorn, Reuters)

WARSAW, Poland (CNS) — Calls for an Olympic boycott because of a Russian law banning “propaganda of nontraditional sexual relations” have become “highly politicized,” said an official of the Russian bishops’ conference.

Msgr. Igor Kovalevsky, secretary-general of the bishops’ conference, said the Catholic Church would not be adopting an official stance on either the boycott or the law.

“It’s hard to predict whether homosexual athletes and fans will face problems at the Olympics — these are issues connected with the life of society in Russia,” Msgr. Kovalevsky told Catholic News Service Aug. 27.

“As a church, we try to help every Catholic, and everyone wishing to become a Catholic, along the path of holiness, as well as to be socialized and fulfill their calling in the world,” he added.

“There are very few homosexuals in our Catholic communities, and we direct our pastoral work at individuals, not groups. But we don’t exclude homosexual people either,” he said.

Russia is hosting the Winter Olympics Feb. 7-23 in the Black Sea resort of Sochi.

Western politicians and gay rights organizations have called for a boycott to protest a June law banning “propaganda of nontraditional sexual relations.” The law imposes heavy fines for promoting “nontraditional relations” among minors via the media and Internet and warns that athletes and fans could face arrest if identifying openly as gays and lesbians.

On Aug. 22, the Russian government assured the International Olympic Committee, whose charter prohibits discrimination, that the June law would not affect athletes and spectators at the Sochi Olympics.

Msgr. Kovalevsky told CNS that Russia’s million-member Catholic Church had a parish in Sochi that would offer pastoral services to Catholic participants at the Olympics.

However, he added that the church was not planning special initiatives in the resort city, where an Orthodox basilica is being built for the Olympics as part of a “spiritual-educational complex.”

Western governments boycotted the 1980 Moscow Olympics to protest the Soviet Union’s invasion of Afghanistan and threatened to withdraw from the 1936 Berlin Olympics over the Nazi exclusion of Jewish and black participants.