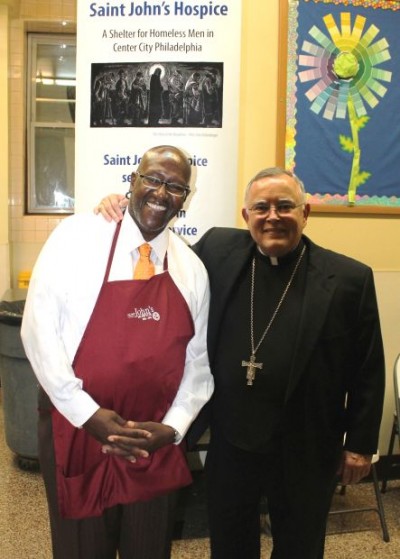 When St. John’s Hospice, which conducts Philadelphia’s most celebrated feeding program for poor and homeless men, held its 50th Anniversary Gala, it chose to do so at its near neighbor, the Reading Terminal Market.

The market is a celebrated institution in its own right — after all, it has been feeding Philadelphians since 1892.

No less than 19 of the market’s stall holders, led by Tootsie D’Ambrosio of Tootsie’s Salad Express, contributed their special dishes to make the Sept. 7 gala a success. Approximately 400 supporters of St. John’s, led by Archbishop Charles Chaput, crowded into the venerable market after hours to enjoy the foods that have made it a Philadelphia treasure.

“It’s the work of the Church to help the homeless and the poor. It is an essential part of who we are,” Archbishop Chaput said. “St. John’s is at the heart of what we see ourselves as being as Church. The Church presents Jesus Christ and builds a community of the faithful because we also help the poor. St. John’s is an exemplary situation for helping the poor.”

The hospice traces its foundation back to the early 1960s and the ministry of St. John the Evangelist Parish to transient and resident men on “skid row,” which was centered on the northern section of the center city parish.

Father Anthony O’Neill, St. John’s pastor, invited the Little Brothers of the Good Shepherd to come to the city to serve at a homeless shelter and feeding program on a property purchased at 1221 Race Street. 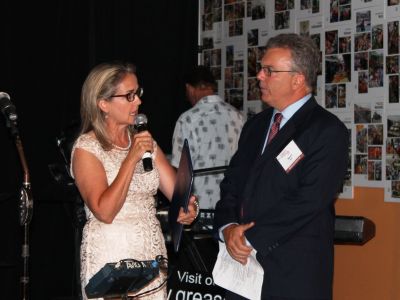 The Little Brothers, under Brother John Hurley, did so and the rest is history. Although more recently the brothers withdrew because of declining numbers, the work continued, ultimately as a branch of Catholic Social Services of the Archdiocese of Philadelphia rather than the parish.

Today St. John’s conducts a variety of programs, including emergency shelter for 52 men at the hospice and more permanent shelter at the adjoining Good Shepherd Program for medically fragile men.

Today “Father John’s,” as it is affectionately known on the street, feeds daily about 350 non-resident men six days a week and three daily meals to the residents. The total fed is remarkably similar to the number of guests at the Sept. 7 gala, according to Kevin Barr, program director for the hospice.

Barr quoted from 13th-century mystic Meister Eckhart who said, “You may call God love, you may call God goodness, but the best name for God is compassion.”

The hospice, Barr said, “is home for the many homeless men who find at St. John’s the dignity and respect that they deserve as sons of God. It is also a way home for those who support the ministry.”

On this particular evening those supporters included the many who bought tickets for the gala and those who volunteered their time, either through food stalls or otherwise.

Tom Mahon, who is better known as a Philadelphia Daily News sports writer, was one of these volunteers, busy serving flutes of champagne to the arriving guests.

“I’ve visited the hospice many times, and I’m glad to help out,” he said.

Hospice board member John Gillespie was also among those doing their bit to make the evening a success.