Archbishop urges prayers for victims of widespread flooding in Colorado 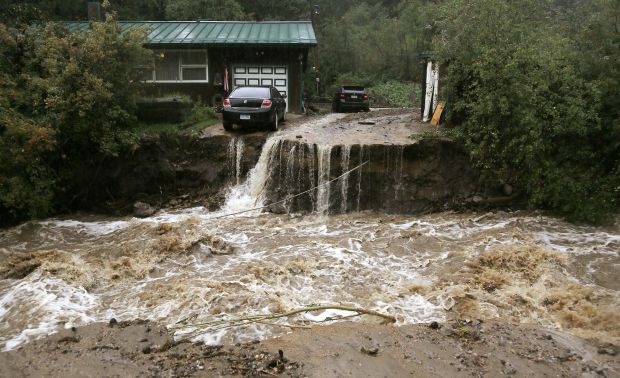 A home and car are seen Sept. 12 after a flash flood in Coal Creek destroyed a bridge near Golden, Colo. (CNS photo/Rick Wilking, Reuters)

DENVER (CNS) — Denver Archbishop Samuel J. Aquila said he is praying for all those affected by extensive flooding in northern Colorado and urged all people of good will “to join me in prayer.”

“This morning I heard with concern about the flooding that is hitting the Front Range and impacting people within the Archdiocese of Denver,” he said in a Sept. 12 statement. “According to the latest reports, three people have already died in the flooding. I am praying for the souls of those victims, for their families and all people who are being affected by the flooding.”

Heavy rains caused severe traffic delays during the morning rush hour, with the cities of Boulder, Aurora and Thornton declaring accident alerts. The widespread flooding destroyed many homes and stalled cars throughout the Colorado’s northern counties, including Boulder and Denver counties.

Public officials closed schools, including the University of Colorado in Boulder, because of the flooding, and ordered evacuations from a number of communities. Rushing water made roads throughout the region impassable. Law enforcement officials confirmed at least three people died in the flood waters.

More rain — from 6 to 10 inches– was expected to fall through the weekend, according to a forecast by the National Weather Service. Residents of canyons in the foothills west of Denver were being warned about the risk of more flash floods.

According to a USA Today story, Boulder County Sheriff Joe Pelle described the situation as no “ordinary disaster,” saying that “all the preparation in the world” could not get rescue workers into mountain canyons to help flood victims “while these walls of water are coming down.”