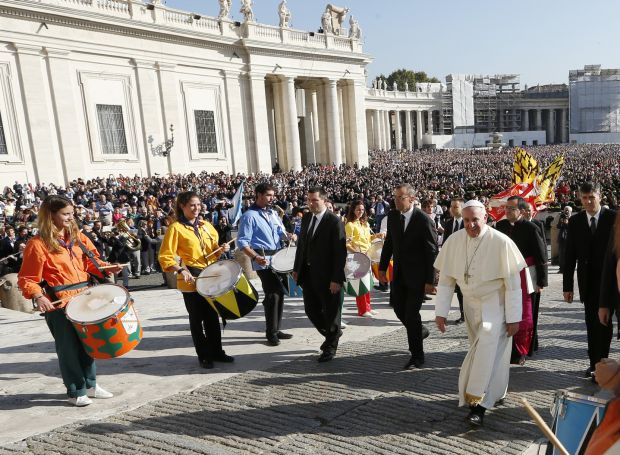 Pope Francis walks past Italian drummers and flag twirlers as he arrives to lead his general audience in St. Peter's Square at the Vatican Oct. 23. (CNS photo/Paul Haring)

VATICAN CITY (CNS) — Seeing Mary as a model of faith teaches Christians that total dedication to Jesus does not take them away from real life, because faith is lived through the chores and cares of everyday existence, Pope Francis said.

Mary lived her faith “in the simplicity of the thousand daily tasks and concerns every mother has, like preparing food, clothing, caring for the home,” he said Oct. 23 at his weekly general audience.

With more than 85,000 people gathered inside and outside St. Peter’s Square for the audience, Pope Francis continued his series of audience talks about the church by focusing on the Second Vatican Council’s assertion that Mary is “the model of the church in the order of faith, charity and perfect union with Christ.”

Many people, he said, believe that because Mary was so special to God and was chosen to bear his son, she can’t really be a model for their faith. But the pope said Mary’s “normal, daily existence was precisely where the unique and profound dialogue between her and God took place.”

The first step in emulating Mary, the pope said, is to know that God “wants always and only the best for us.”

Pope Francis said Mary is also a model of charity or love for Christians. When, for example, she went to visit her pregnant cousin Elizabeth, she did not just bring material help or gifts; she brought Jesus.

The church and each of its members must bring Jesus to others, he said. “The church is not a business or a humanitarian agency or an NGO (nongovernmental organization), but is sent to bring Christ and his Gospel to all.”

Pope Francis asked those at the audience to think about what kind of love they have for others and how that reflects their faith and their obligation to share with others the love of Jesus.

“What is the love we share with others? Is it the love of Jesus that shares, forgives and accompanies? Or is it a diluted love, you know, like when you dilute wine so much it tastes like water? Is our love like that?” he asked, adding whether such a diluted love seeks the good of the other, or only of oneself.

“In your parishes do you love one another like brothers and sisters?” he asked the crowd. “Or do you judge each other?”

Finally, the pope said, Mary is a model of total dedication to Jesus, which she lived by raising him, accompanying him and finally standing at the foot of his cross as he offered his life for the salvation of all.

“Do we remember Jesus only when something goes wrong and we’re in need?” the pope asked. “Or is our relationship with him something constant, a profound friendship, even when it means following him on the way of the cross?”

By touring the square and kissing babies before the audience, giving his talk and greetings in several languages, and personally blessing the sick, newlyweds and other special guests at the end, Pope Francis spent more than three and a half hours in the square.

PREVIOUS: To understand God, get down on your knees, pope says

NEXT: Baptism for the child of nonpracticing Catholics