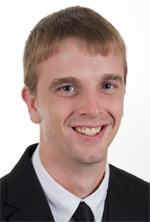 My journey to St. Charles Borromeo Seminary was a rather quick and drastic life change.

Receiving my degree from Penn State and gaining some experience in journalism, I thought landing a job would come easily after graduation. The next three months, though, were mentally exhaustive, as I sent my resume to a variety of occupational fields with no luck.

Finally, I received a phone call from an editor of a newspaper in Auburn, N.Y. He read my resume and wanted me to visit the town for a couple interviews with staff members. I had the opportunity to cover high school sports, Syracuse University basketball and football and minor league baseball for a small-town news outlet.

The money wasn’t great, but the job was a solid gig for a recent college graduate looking to pursue a career in journalism. I traveled to Auburn, an isolated yet picturesque town in the Finger Lakes region, and returned home with a good vibe.

“I can see myself starting my career there,” I thought.

Another phone call came the next day. The editor wanted to add me to the staff. After receiving more time to further mull over the decision, I called back and accepted, but I wasn’t expecting the inner turmoil I started feeling afterward.

I believed local opportunities in journalism would pop up, but I also understood how quickly the occupational field had deteriorated, and I just didn’t want to leave home. I couldn’t leave home. I attended school at State College for four years without often returning to Plymouth Meeting.

Auburn was only an hour’s drive further from Penn State, so I was still a car ride, though a lengthy one, away. No logical reason existed as to why I didn’t want to move there. Something just wasn’t right.

I was expected to drive north to Auburn again for another pre-hiring meeting, but I couldn’t go. I called the editor back.

“I just can’t afford to take the job with my student-loan debt and the cost of rent,” I said without disclosing the other reason I wasn’t accepting it — the interior intuition I felt.

“If you want to pursue journalism, you won’t find a better money situation starting out at any other paper,” he said.

I then found a temporary job at a law firm in Radnor and started delving into spiritual reading. “The Diary of St. Faustina,” a book I received as part of my high school theology classes, alerted me to God’s greatest characteristic — mercy, especially for the most ardent sinners. I also read a Pope John Paul II biography, informing me about his devotion to the Blessed Mother and his total reliance on her throughout his papacy. The basis for this commitment belonged to a book called “True Devotion to Mary,” which I subsequently bought online and read immediately upon arrival to my home.

My personal call always arose interiorly. I continually felt an attraction to the Eucharist and confession. Some Sundays I peered at the stained-glass windows in the church of my home parish, Epiphany of Our Lord. For some reason, during those days the sun seemed to shine brighter through the words “The Call” next to “of Abraham” and “of Moses.”

One night my family prayed the rosary together.

I thought, “Alright God, if the priesthood is what you have in store for me, I’ll pursue it, but let me know once and for all after this rosary.”

Afterward, my dad was the first to speak.

“Why don’t you call your priest friend from Penn State?”

I took his advice and called Father Matt, whose words still reverberate in my ear.

“You should visit some different seminaries,” he said. “You’ll know if God is calling you to the priesthood. You’ll just know.”

I still found my will and God’s opposing each other. I still desperately and forcibly clung to a life away from the priesthood. But as I relented to its idea, I found the anxiety started to subside.

Brendan Monahan is seminarian in the pre-theology II class at St. Charles Borromeo Seminary, Wynnewood, and a member of Epiphany of Our Lord Parish, Plymouth Meeting. Learn about the seminary’s annual open house here. The annual St. Charles Seminary Appeal is now underway. Learn more about the appeal and consider making a contribution here.

PREVIOUS: Through pots of fire

NEXT: Remembering a titan of the Second Vatican Council