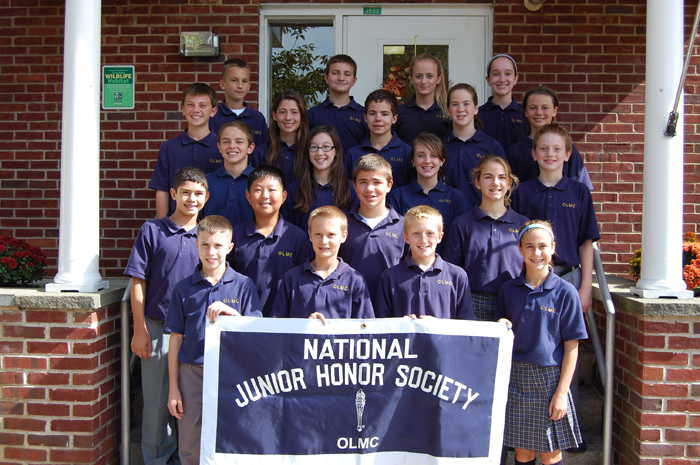 Our Lady of Mount Carmel School in Doylestown held an induction ceremony Monday, Oct. 7 for 21 academically flourishing seventh grade students who were welcomed into the Blessed Duns Scotus Chapter of the National Junior Honor Society.

The school, one of a handful of nationally recognized Blue Ribbon Schools in the Philadelphia Archdiocese, is led by Principal Elizabeth Barry and Msgr. Charles Hagan, pastor of Our Lady of Mount Carmel Parish.

The Doylestown school is well known to families in the central Bucks County area for providing an excellent academic and faith-based education to students in Kindergarten through eighth grade.

The keynote speaker for the induction ceremony was Marc Farzetta, host of sports radio station 610 WIP in Philadelphia. An alumnus of Our Lady of Mount Carmel School, Farzetta also participated in student council, choir, sports and received the Good Sportsmanship Award at his graduation in 1997.

His talent for public speaking was recognized at an early age at OLMC where he got a jump start on his career as a sports radio announcer by serving as the bus announcer for the school.

Farzetta attended Archbishop Wood High School in Warminster and is a 2005 graduate of Temple University, where he received a degree in broadcasting. He credits the success he has had throughout his education and career to the moral values, strong work ethic and perseverance developed while attending OLMC School.

“Our Lady of Mount Carmel School had such a strong influence on my development at a young age,” Farzetta said. “The values I learned at home were lessons that were extended in this school.”

The National Junior Honor Society is characterized by the five pillars of scholarship, leadership, citizenship, character and service.