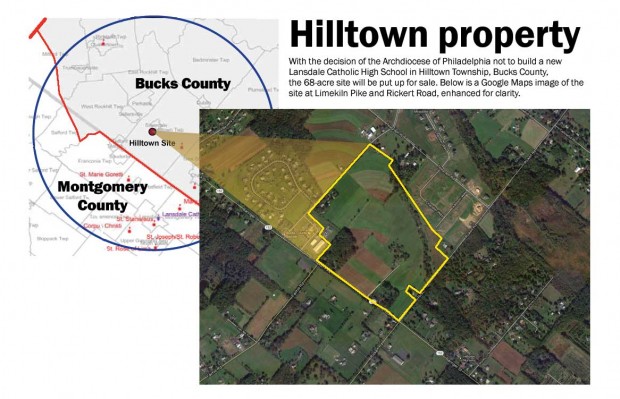 As part of a continuing strategy to plug its financial holes, the Archdiocese of Philadelphia has sold a large property previously set aside for construction of a new Catholic high school.

A 68-acre tract in Hilltown, Bucks County, is under agreement of sale for $2.6 million, archdiocesan spokesman Ken Gavin confirmed Oct. 24. The transaction is not expected to close for about a year, he said.

The property had been held since 2001 for possible construction of a Catholic high school for an area now served by Lansdale Catholic High School. The economic downturn and other factors prevented the development from proceeding after the completion in 2010 of Pope John Paul II High School in Royersford, Montgomery County.

The discovery of the dire condition of the archdiocese’s finances in 2011-2012 further ensured that a new high school would not be built and that the land in Hilltown would eventually be sold.

Proceeds from the sale will go toward easing an $82 million shortfall in the archdiocesan Trust and Loan Fund, as stated in a financial report last summer.

The fund — which operates like a bank as it accepts deposits, pays interest on them to depositors and hold assets for loans to parishes for projects and specific needs – is one of four archdiocesan funds whose liabilities exceed assets.

The others are the insurance fund, priest pension fund and lay employee retirement plan. Liabilities of the four funds collectively represent a $350 million long-term debt as of June 2012.

Other smaller properties have been sold at lower sale prices by the archdiocese in recent months, in addition to previous sales of larger properties such as the archbishop’s former residence and the vacation home for priests in Ventnor, N.J.

PREVIOUS: Charges of sexual assault against priest dropped after death of accuser