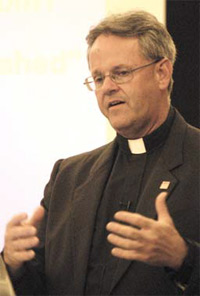 Cardinal John Foley’s legacy as a world-class communicator and professor continues with the establishment of an endowed chair at St. Charles Borromeo Seminary.

The seminary announced Oct. 3 the creation of the John Cardinal Foley Chair of Homiletics and Social Communications and named Oblate Father Thomas Dailey to hold the inaugural position.

In a news release, the seminary cited the faculty position as the only one of its kind in seminary or university education. Its mission is to promote the work of priestly formation, participation in church life and professional dialogue through mass media and social communications.

A religious priest of the Oblates of St. Francis de Sales (the patron saint of journalists and Catholic communicators), Father Dailey founded the Salesian Center for Faith and Culture at De Sales University in Center Valley, Pa. He sees this new position as a unique opportunity to carry on the mutual integration of theology and communications.

“Cardinal Foley had a great devotion to St. Francis de Sales,” said Father Dailey, “and both of them saw the need for engaging new media in the work of the Church.”

Bishop Timothy C. Senior, rector of the seminary, said the chair “not only honors one of our own but also signals to the next generation of priests their need to be more fully and more faithfully engaged in social communications.”

Ordained a priest for the Archdiocese of Philadelphia in 1962, Cardinal Foley taught a generation of priests as a faculty member for 17 years at St. Charles Seminary, and served for 14 years as editor of The Catholic Standard and Times newspaper.

“Whether in church or online,” Bishop Senior said, “we all need to learn how to thrive in this new world so as to fulfill our mission of bringing Christ to those around us.”

For more than 23 years, Cardinal Foley served as president of the Pontifical Council for Social Communications at the Vatican. Popularly known as “the voice of Christmas” for translating the broadcast of the papal midnight Mass at St. Peter’s Basilica, Cardinal Foley guided the Church’s reflection on the role of the media and developed policies concerning the ethical and cultural influences of all communications technologies.

“He promoted a vital internal dialogue within the Church on these issues, and also in broader international contexts, by calling on all communicators to seek for the highest and most noble standards of their profession,” Archbishop Celli said.

After being created a cardinal in 2007, Cardinal Foley returned from Rome to retirement in his native Philadelphia, where he died in December 2011.

To continue the legacy of his ministry, the John Cardinal Foley Chair will explore the theological dimensions of the world of social communications through lectures, courses and conferences.  New technologies offer effective means by which evangelization can take place, such as websites, mobile applications and social networking platforms. The chair’s primary focus, however, is the culture of communications.

The seminary’s news release indicated the chair will help the church enter the “new way of thought” explored by today’s media, which “generates new forms of social relationships.”

“The Church can and must enter into this new world as the guardian and promoter of what it means to be who we are as human persons and faithful believers,” it said.

Father Dailey pointed to the saintly founder of his order, Francis de Sales, “renowned for his apologetics,” he said.

The saint “communicated through pamphlets and letters and books that were widely distributed with the aid of the then newly invented printing press. Cardinal Foley made use of today’s means to teach professionals and the general public about the important ethical aspects of communications media,” Father Dailey said. “Our task today is to see this digital world in the light of faith and to harness its potential as a means for producing a spiritual transformation.”

Father Dailey will deliver the inaugural John Cardinal Foley Chair lecture at St. Charles Borromeo Seminary on Jan. 27, 2014.  The talk, titled “Beauty, Truth and Goodness in Person,” will examine the topic of evangelization and social communications as modeled by Pope Francis.  Attendance is free and open to the public.

For more information about the John Cardinal Foley Chair or to contribute to its endowment, visit the seminary’s website at www.scs.edu or contact Father Dailey at 610-785-6271.