After decades, soccer’s elder statesmen still have the fire to coach, teach 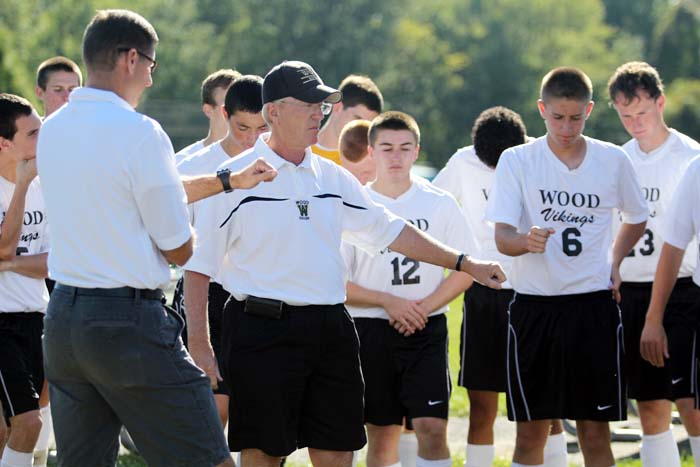 Coach Joe Krantz calls his soccer team together as he has done for decades at Archbishop Wood High School. (Photos by Sarah Webb) 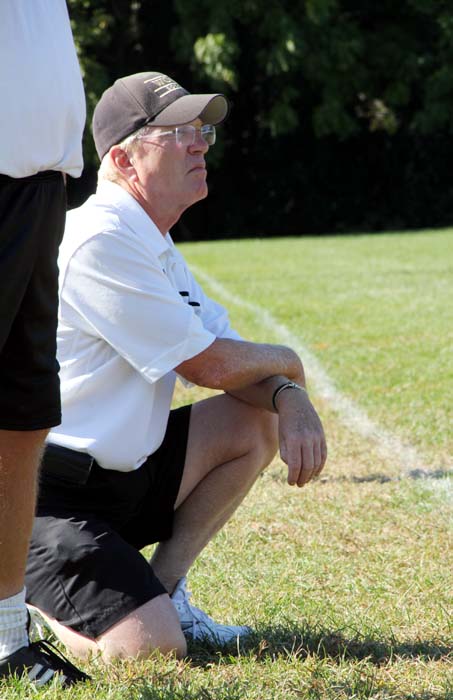 How can Allen Iverson make his way into an article that deals with Catholic-school sports? Here’s how.

At his retirement ceremony on the floor of Wells Fargo Center Wednesday afternoon, the former 76ers great and future Hall of Famer explained that his body remains willing to continue playing basketball, but his heart just isn’t in it anymore.

“When that happens,” he said pointing to his chest, “there is nothing you can do. It’s time to move on.”

Juxtapose Iverson’s personal insight to two of the most successful coaches in Catholic League soccer history.

Come next fall, both men will be directing their young, impressionable troops from their respective sidelines. Murray and Krantz – both of them respected institutions at their high schools for a combined seven decades (Krantz teaches history; Murray teaches math and is the school’s athletic director) – still possess the very thing that Iverson lost.

The heart to keep going.

“I’ve been doing this for so long that you would think I might get tired of it,” said Krantz. “But that hasn’t happened yet. I still enjoy everything about it. I look forward to every season.

“I can’t wait for the games to begin. When it’s an hour before, I’m thinking, ‘Come on. Let’s start playing.’ When I don’t feel that way, then I’ll know it’s time to step aside.”

Murray feels very similarly. Standing on the Prep sideline during a recent football game against Father Judge, Murray appeared spryer than ever.

When he talks about high school athletics, whether it is soccer or football or any other sport, Murray has a noticeable gleam in his eye.

In other words, the fire still burns.

“Getting 600 wins is nice, but a lot of it is because I’ve been around a long, long time,” said Murray, a 1959 Prep grad whose Hawks have reached the postseason for 39 consecutive seasons. “We’ve had very dedicated assistant coaches and a lot of very intelligent players who have learned the game the way we’ve coached it. You can’t have one without the other.”

Murray waxed philosophical when it came to his own eventual swan song.

“You’d like to think you would know when it’s time,” he said.

With a chuckle, he acknowledged that that isn’t always the case.

“It would certainly be better than someone coming to me and saying, ‘Jim I really think it’s time to move on.’ But if that ever gets to be the case, I trust that someone here at the Prep will take me into a room, close the door, and tell it to me straight.” 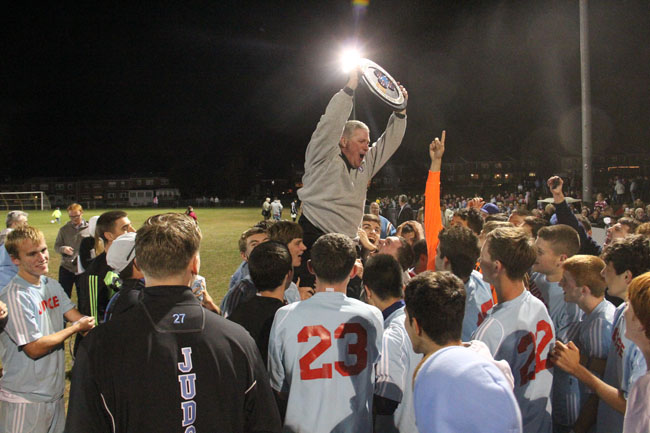 When Murray won his first and only Catholic League title in 2010 after having been in the championship 15 prior times without a win, Krantz was one of countless people who expressed tremendous happiness for Murray – this despite the fact that Archbishop Wood was the historic event’s victim.

Because when it’s all said and done, coaching is more than just about wins and losses.

“We do everything possible to try and beat each other,” Krantz said, “and our players do the same. We tried everything we could do in that championship, but the Prep beat us.

“In the end, it’s really just a game. So when you don’t win, you tip your hat to the one who did. We are all friends. We root for each other to do well.”

“If you can’t shake hands after a game, then it’s no longer a game,” he said.

This season did not include a Catholic League championship for either coach, but few of them do. That’s what happens when you play against so many different talented teams in your own back yard.

Oct. 16 sort of defines the point.

In the last game of the regular season, Archbishop Wood was taking on Father Judge, which entered the contest a perfect 16-0. The Crusaders — the eventual Catholic League champions by virtue of a 3-1 triumph over Lansdale Catholic on Oct. 29 — had allowed a grand total of seven goals all season and had scored a minimum of two goals in every game except one.

In other words, they seemed invincible.

Meanwhile, the Vikings were sitting on a bench of mediocrity at 7-6-3. Since 10 teams make the CL playoffs, it was just a matter of which seed the Vikings would place.

In yet another typical Catholic League phenomenon, Wood pulled off the upset in front of its own home crowd, 1-0.

Krantz was asked if the win felt “better than usual” since it ruined Judge’s perfect season. He admitted that it did.

“Every win feels good but some feel better than others,” Krantz said. “It’s really about memories; some you remember a lot more because there’s a special element to it. Judge was the heavy favorite coming into the year and it wasn’t surprising that they kept winning. So to beat a team like that is special.”

While lauding his players for a job well done, Krantz acknowledged that Judge might have been less focused than usual.

“In fairness to Judge, it was the last regular season game and they already had clinched first place,” Krantz said. “I think we caught them a little by surprise.”

Playing spoiler is nothing new for Krantz. Strath Haven High School won two state championships and in both seasons the Panthers had precisely one loss – both times it was against Archbishop Wood.

For Krantz, there were two games he pointed out that came oh-so-close to headache status.

Both games easily could have gone the other way.

“In the Catholic League, there are no days off,” Krantz said.

In 2011, the Prep blew a 3-0 lead against Father Judge before losing, 5-4. In all of his coaching experiences, Murray had never experienced such a free-fall, and it bothered him – yet more evidence that the passion to succeed is stronger than ever.

“You can never let your guard down, and after we got that big lead, that’s what we did,” Murray said. “I was steamed, and I let them know about it.”

But Murray kept his composure, something he promised he would always do after an incident that taught him a valuable lesson during his younger years.

In 1968, in what would be his final season coaching at Friends Central High School, the only thing that stood in the way of a Penn-Jersey League title was a win over Germantown Friends, a team that Friends Central had handled earlier.

However, Friends Central could manage only a 1-1 tie, and thus a share of the league title with the George School.

Later, an aggravated Murray kicked a water bucket. Someone – perhaps a parent – asked him why he had just done that.

An embarrassed Murray was humbled.

“No one will ever see me do anything like that ever again,” Murray promised.

More than 40 years later, not a single water bucket has felt the wrath of Murray’s cleats.

But like his friend and comrade Joe Krantz, his wisdom continues to live on.