Pope Francis says he goes to confession every two weeks 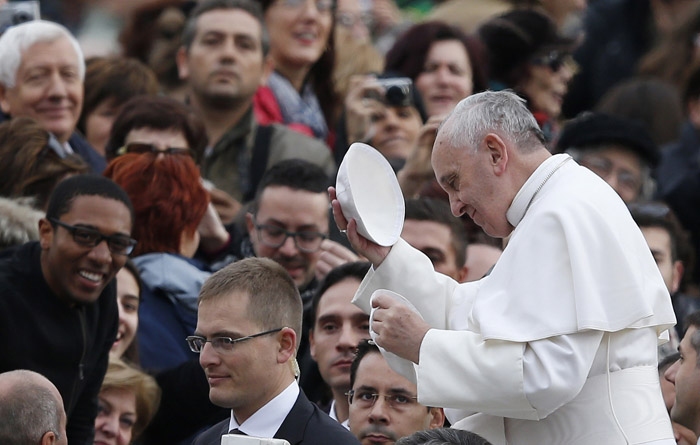 Pope Francis tries on a zucchetto given by someone in the crowd as he arrives to lead his general audience in St. Peter's Square at the Vatican Nov. 20. (CNS photo/Paul Haring) 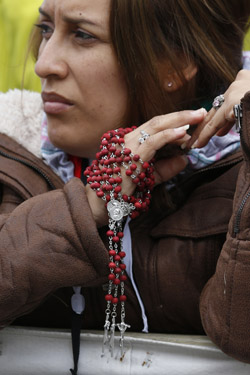 VATICAN CITY (CNS) — Pope Francis said he goes to confession every two weeks, knowing that God never tires of forgiving those who repent, but also knowing that having a priest say “I absolve you” reinforces belief in God’s mercy.

Using the literal Italian translation of a Spanish saying, “It’s better to turn red once than yellow a thousand times,” Pope Francis said he knows some people are embarrassed to confess their sins to a priest, but it is the best path to spiritual healing and health.

At his weekly general audience in St. Peter’s Square Nov. 20, Pope Francis reflected on the forgiveness of sins as one of the missions Jesus entrusted to his apostles and their successors.

In a world often dominated by “individualism and subjectivism,” he said, many people — including many Catholics — say that God will forgive their sins and they have no need of the sacrament of confession and the ministry of a priest.

“Certainly, God forgives every repentant sinner, but the Christian is bound to Christ and Christ is united to his church,” the pope said. “God, in his sovereign mercy, forgives everyone, but he wanted those who belong to Christ and his church to receive forgiveness through the community’s ministers.”

“Priests, too, need confession, even bishops. We are all sinners. Even the pope goes to confession every two weeks because the pope, too, is a sinner,” he said. “My confessor hears what I say, offers me advice and forgives me. We all need this.”

Through the presence and words of a priest, he said, penitents have “the certainty of forgiveness in the name of the church.”

The church, he said, does not “own” the power to forgive sins, but is its servant and “rejoices every time it can offer this gift.”

Pope Francis said he knows some people are embarrassed to confess their sins to a priest, but it is the best path to spiritual healing and health.

Pope Francis said the ministry of the confessor is “very delicate,” which is why the priest must recognize that he, too, is a sinner forgiven by God, the pope said. He must not “mistreat the faithful, but be meek, benevolent and merciful, knowing how to sow hope in the penitent’s heart and, especially, recognize that the brother or sister approaching the sacrament of reconciliation is seeking forgiveness just like the many people who approached Jesus seeking healing.”

“If a priest can’t be like this, it would be better if he did not administer the sacrament until he changes,” Pope Francis said. “The faithful have the right to find in their priests a servant of God’s forgiveness.”

At the end of his audience, Pope Francis asked Catholics to join him Nov. 21 in offering material support to and praying for cloistered nuns, who “dedicate themselves to God in prayer and silent work.”

He also gave his public support to the United Nation’s International Year of Family Farming, which was to kick off Nov. 22. Pope Francis said the year should highlight the valuable contribution families make to the economy, rural development, respect for nature and concrete aid to those in need.

Pope Francis said he hoped the celebration would help people recognize the value of “the innumerable contributions the family makes to the economic, social, cultural and moral growth of the whole human family.”

PREVIOUS: Pope prescribes daily rosary for what ails you

NEXT: Churches must first be places where God is adored, pope says