Pope: To face death with courage, peace, stay close to Jesus in life 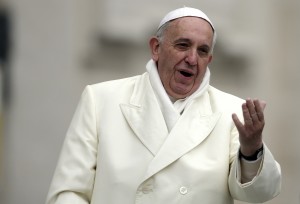 VATICAN CITY (CNS) — The thought of death and losing a loved one is scary when there is no faith in Jesus guiding people to an everlasting life, Pope Francis said.

“If we live united with Jesus, are faithful to him, we will be able to face with hope and serenity even the coming of death,” he said during his general audience in St. Peter’s Square Nov. 27.

The day’s catechesis on death and the resurrection of the dead, and a continued reflection on the topic scheduled for Dec. 4 would be the last in a series of talks on the creed, the pope said. Retired Pope Benedict XVI began the audience series on basic Catholic beliefs in October 2012 to run for the duration of the Year of Faith, which ended Nov. 24.

Wearing a long coat, white scarf and sniffling in the damp cold of Rome, Pope Francis congratulated the people in the square for their courage in showing up and bearing with the chilly temperatures.

In his catechesis, he said death touches everyone and can make people question the meaning of life.

“I’m always struck by the question: Why do children suffer? Why do children die?” he said. Such tragedies can seem “scandalous” if death is seen as the end of everything.

If death is seen as the final end, it’s frightening and “becomes a threat that shatters every dream, every prospect, severs every relationship and interrupts every journey,” the pope said. In that way, life is seen as a finite timeline that begins at birth and ends at death; there is nothing beyond earthly life and earthly life is lived as if God didn’t exist, he said.

A typically atheist outlook, he said, believes life is “finding oneself by chance in the world and journeying toward nothing.”

The atheistic vision can be a bit more “practical” as well, he said, when it sees life existing for the pursuit of material things and the fulfillment of personal desires.

Such mistaken views of life try to hide death, deny it or trivialize it “so that it won’t be frightening,” he said. But deep down, people know there has to be more.

When people lose a loved one, they feel in their heart “that this can’t be all there is,” that the gift of life “was not worthless,” he said. This instinct and a “yearning for the eternal” reflect the Christian meaning of death, he said.

“Jesus’ resurrection gives not only the certainty of life after death, but shines light on the mystery of the death of each one of us” and offers consolation, he said.

“People tend to die as they have lived,” the pope said.

“If my life has been a journey with the Lord with faith in his immense mercy, I will be prepared to accept the final moment of my earthly existence as the definitive, confident letting go into his welcoming arms,” and in anticipation of seeing God face-to-face, he said.

“This is the most beautiful thing that can happen to us, to contemplate face-to-face that wonderful face of the Lord, to see him, how he is beautiful, full of light, love, tenderness,” the pope said. “We are heading there, to find the Lord.”

Jesus invites people to prepare on earth for life in heaven with him, Pope Francis said.

“There is a sure way to prepare oneself well for death — by staying close to Jesus with prayer, in the sacraments and also in practicing charity” by reaching out to those in need.

Jesus is “present in the weakest and neediest,” the pope said, and he identified himself with them when he said that those who clothe the naked, feed the hungry and visit prisoners are clothing, feeding and visiting him and, therefore, would have eternal life.

“Whoever practices mercy is not afraid of death,” the pope said, asking audience members if they agreed. After the crowd shouted “yes,” the pope asked everybody to repeat the phrase and “say it out loud together so as not to forget.”

“If we open the door of our life and our hearts to the least of our brothers, then also our death will become a door that will lead us to heaven,” he said.